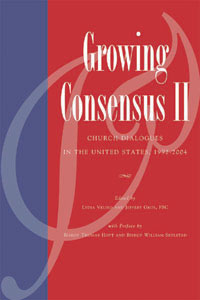 [Vienna, Austria] The twelfth meeting of the Joint International Commission for Theological Dialogue between the Orthodox Church and the Roman Catholic Church took place in Vienna, Austria, a city with a long history, a bridge between West and East, with a rich ecumenical life. The meeting, generously and fraternally hosted by the Roman Catholic Archdiocese of Vienna, from 20-27 September 2010, in the Kardinal König Haus.
END_OF_DOCUMENT_TOKEN_TO_BE_REPLACED END_OF_DOCUMENT_TOKEN_TO_BE_REPLACED

Pope Francis said he was referring particularly “to the reflection of the Catholic Church on the meaning of episcopal collegiality and the tradition of synodality, so typical of the Orthodox churches,” in which the synods function as a symbol of the unity of the local churches and as a governing body united to the patriarch or spiritual leader of the church.
END_OF_DOCUMENT_TOKEN_TO_BE_REPLACED END_OF_DOCUMENT_TOKEN_TO_BE_REPLACED

Participants were being asked “to determine whether the draft accurately reflects the current consensus on the delicate question of the theological and ecclesiological aspects of primacy in its relation to synodality in the life of the Church or whether it will be necessary to continue to delve deeper into the issue,” said the Vatican communique.
END_OF_DOCUMENT_TOKEN_TO_BE_REPLACED END_OF_DOCUMENT_TOKEN_TO_BE_REPLACED “Synodality,” a key concept of Pope Francis’ papacy, was used repeatedly in the final document of the Synod of Bishops on young people, the faith and vocation discernment. In simple terms, “synodality” means “walking together” with every member of the church, recognizing that the grace of baptism makes one part of the body of the church and, therefore, responsible for its life and mission. “The church must really let herself be given shape by the Eucharist that she celebrates as the summit and source of her life,” being like “the bread made from many stalks of wheat and broken for the life of the world,” the synod document said.
END_OF_DOCUMENT_TOKEN_TO_BE_REPLACED END_OF_DOCUMENT_TOKEN_TO_BE_REPLACED Pope Francis has decided the next world Synod of Bishops at the Vatican, which will take place in October 2022, will have the theme: “For a synodal church: Communion, participation and mission.”

The Vatican announced the choice of “synodality” as the theme in a brief communique March 7.

“Synodality,” which literally means “walking together,” has become a key topic of Pope Francis’ pontificate, but one which has raised questions and even confusion.

The basic idea in the pope’s teaching is that the grace of baptism makes one part of the body of the church and, therefore, responsible for its life and mission. In a hierarchical church, that shared responsibility calls for regular, serious and structural forums for listening to all members of the church. At the same time, as the pope has said, it does not mean putting decisions to a vote as if a synod were a parliament.
END_OF_DOCUMENT_TOKEN_TO_BE_REPLACED END_OF_DOCUMENT_TOKEN_TO_BE_REPLACED