The Anglican-Methodist Covenant celebration and signing on 1 November

The Anglican-Methodist Covenant in England will be signed at a national celebration on Saturday 1 November 2003, at 11:00am, in the presence of Her Majesty the Queen. Earlier this year the Covenant was strongly endorsed by the Methodist Conference of Great Britain and the General Synod of the Church of England. The service of celebration will begin at Methodist Central Hall, Westminster, at 11.00am, in front of an invited assembly from both Churches as well as ecumenical and civic guests. After the historic Covenant is signed at Methodist Central Hall, the ceremony will continue at Westminster Abbey at 11:45am with a short service of thanksgiving and dedication. The Covenant will be signed on behalf of the Church of England by the Archbishop of Canterbury, the Most Reverend Dr Rowan Williams, the Archbishop of York, the Most Reverend Dr David Hope, and the Secretary General of the Archbishops’ Council, Mr William Fittall.
END_OF_DOCUMENT_TOKEN_TO_BE_REPLACED END_OF_DOCUMENT_TOKEN_TO_BE_REPLACED

At his first meeting with leaders of the Jewish community in Rome, Pope John XXIII, it’s said, greeted them with the words, “I am Joseph, your brother”. He was evoking one of the most poignant moments in the Old Testament: Joseph, whose arrogance had provoked the resentment and rejection of his brothers, is carried off into exile and slavery, then rises to great power. He finds that this power is given to him so that he can save the lives of his brothers when they come to him, not knowing him, begging him for help; and at last he reveals who he is: “I am Joseph, your brother”.
END_OF_DOCUMENT_TOKEN_TO_BE_REPLACED END_OF_DOCUMENT_TOKEN_TO_BE_REPLACED

When Pope Benedict met with representatives of the World Methodist Council in December of 2005, he alluded to the Speech of Pope Paul VI, noting that when we look back to the nearly 40 years of patient and persevering dialogue between Methodists and Catholics since the end of the Second Vatican Council, “there is much for which we can today give thanks”.
END_OF_DOCUMENT_TOKEN_TO_BE_REPLACED END_OF_DOCUMENT_TOKEN_TO_BE_REPLACED 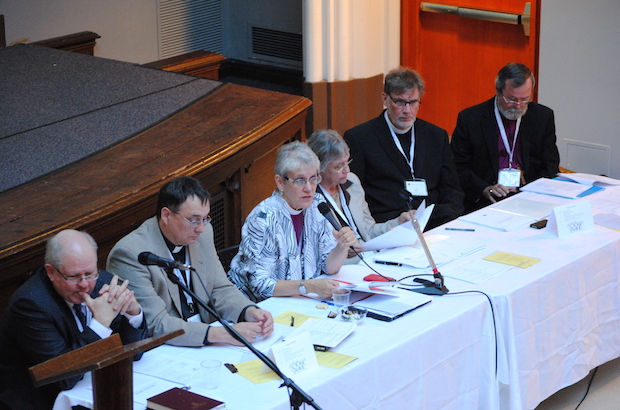 During the summer months ecumenical news dries up as church leaders, pastors, and theologians head off on their holiday plans. However, this year a very significant event occurred while we were all at the lake. Since 2001, Methodists have expressed appreciation for the Lutheran-Roman Catholic “Joint Declaration on the Doctrine of Justification” (JDDJ). Not long after the formal affirmation of the JDDJ, representatives of the Methodist World Council and the World Alliance of Reformed Churches gathered with the two signatories to discuss the possibilities of expanding the consensus to include their constituencies. This summer, on July 23, the World Methodist Conference, a gathering of 76 churches in the Methodist tradition, affirmed the Joint Declaration in a signing ceremony together with Lutheran and Roman Catholic representatives.
END_OF_DOCUMENT_TOKEN_TO_BE_REPLACED END_OF_DOCUMENT_TOKEN_TO_BE_REPLACED

A consultation has been held in London to review the progress of the report of the Anglican – Methodist International Commission “Sharing in the Apostolic Communion”, which was received by the World Methodist Council in 1996 and the Lambeth Conference in 1998. The meeting was chaired by the Revd Professor Robert Gribben, Chair of the Standing Committee for Ecumenics and Dialogues of the World Methodist Council, and Bishop Harold Miller, Bishop of Down and Dromore in the Church of Ireland, nominated by the Archbishop of Canterbury and the Secretary General on behalf of the Anglican Communion. Five members were nominated by each church for the purpose of this review. The meeting took place from 30 October to 1 November 2007 at the historic Wesley’s Chapel.
END_OF_DOCUMENT_TOKEN_TO_BE_REPLACED END_OF_DOCUMENT_TOKEN_TO_BE_REPLACED

Communiqué: The Anglican-Methodist International Commission for Unity in Mission

The Anglican-Methodist International Commission for Unity in Mission held its first meeting in the Centro Anglicano de la Diócesis de México in Mexico City, as guests of the Anglican Consultative Council. The Commission was co-chaired by the Right Revd Harold Miller, the Bishop of Down and Dromore (Church of Ireland), for the Anglican Communion, and the Revd Professor Robert Gribben (Uniting Church in Australia), Chairman of the Standing Committee on Ecumenics and Dialogue, on behalf of the World Methodist Council.

Cardinal asks dialogue partners if an ecumenical catechism might work