Church unity hasn’t happened yet, but Catholics and Anglicans have a new list of concrete suggestions for ways to bring the two churches closer. A joint commission of Catholic and Anglican bishops has produced a 42-page report which aims “to bridge the gap between the elements of faith we hold in common and the tangible expression of that shared belief in our ecclesial lives.” The result of work by theologians and bishops in North America, Europe and Australia, Growing Together in Unity and Mission summarizes the agreements reached in 40 years of Anglican-Roman Catholic dialogue, setting out common belief in the Trinity, the church as communion in mission, Scripture, Baptism, Eucharist, ministry, authority in the church, discipleship and holiness, and the Blessed Virgin Mary. It also sets out in eight boxed sections areas of disagreement. The disagreements take up 15 of the 126 numbered paragraphs in the document.
END_OF_DOCUMENT_TOKEN_TO_BE_REPLACED END_OF_DOCUMENT_TOKEN_TO_BE_REPLACED

Pope Benedict XVI and Anglican Archbishop Rowan Williams of Canterbury knelt together before the tomb of an 11th-century Christian king after affirming the need for Catholics and Anglicans to give a united witness to society. St. Edward the Confessor, who is buried in the Anglicans’ Westminster Abbey, reigned five centuries before English Christians became divided.

The pope and the primate of the Church of England paid homage together to the Christian king Sept. 17 at the end of an afternoon that included public speeches, a 30-minute private meeting and a joint ecumenical prayer service in Westminster Abbey. Archbishop Williams welcomed Pope Benedict as the first pope ever to visit Westminster Abbey, which was home to a community of Catholic Benedictine monks until 1540 when King Henry VIII dissolved the monastic community.
END_OF_DOCUMENT_TOKEN_TO_BE_REPLACED END_OF_DOCUMENT_TOKEN_TO_BE_REPLACED

Anglicans and Catholics finding one voice

Inspired by the apostle Peter’s exhortation to offer “an account of the hope that is in you” (1 Peter 3:15), members of the Anglican-Roman Catholic Dialogue of Canada (ARC Canada) are working on a project aimed at giving such an account with one voice.

Using as their starting point some of the fundamental questions that continue to be asked by people inside and outside the church, members of ARC Canada are composing short, accessible pieces of writing that offer responses rooted in the common Christian tradition shared by Catholics and Anglicans.

For more than two years, a group of Evangelical and Catholic Christians in Saskatoon have been meeting to talk about their common faith in Jesus Christ, discussing what is shared, as well as examining where their understandings and convictions differ.

Formally appointed by the Roman Catholic Diocese of Saskatoon and the Saskatoon Evangelical Ministers Fellowship, the local dialogue group is now in the process of writing a joint statement, just as a second Catholic-Evangelical worship service is being planned for Saskatoon Nov. 14.

It was after the first shared worship service in March 2011 at St. Paul’s Catholic Cathedral that a small group of church and ecumenical leaders met to try and find ways for the two traditions to further engage in common prayer, common witness, common mission and common study. A dialogue group was subsequently launched, with the first meeting held in December 2011.

Rev. Harry Strauss, associate pastor at Forest Grove Community Church (left) and a member of the Saskatoon Evangelical Ministers Fellowship, and Nicholas Jesson, ecumenical officer for the Roman Catholic Diocese of Saskatoon, are part of the 20-member dialogue group, which includes 10 representatives from each tradition.

Both Strauss and Jesson are also serving on a four-member committee that is now drafting a joint statement emerging from two years of conversation, study and relationship building.

Strauss describes the joint statement: “We confess our common faith, we acknowledge our differences and we affirm our common mission.”

The reconciliation process between the Lutheran World Federation and Mennonite World Conference has created fertile ground for collaboration. A report summarizing the LWF–MWC action of reconciling with Mennonites over the condemnations in the Augsburg Confession aims to help LWF churches, pastors, seminaries and congregations to “implement the LWF commitment to teach differently about Anabaptists, especially to how they are described in the Augsburg Confession.”

“The seeds of reconciliation sown more than 30 years ago, which flowered at the service of reconciliation in Stuttgart in 2010, are now truly bearing fruit,” says John D. Roth, MWC representative on the LWF Task Force and contributor to the document. “Mennonite and Lutheran pastors and church leaders will find lots of ideas for how they might engage each other at the local level.” 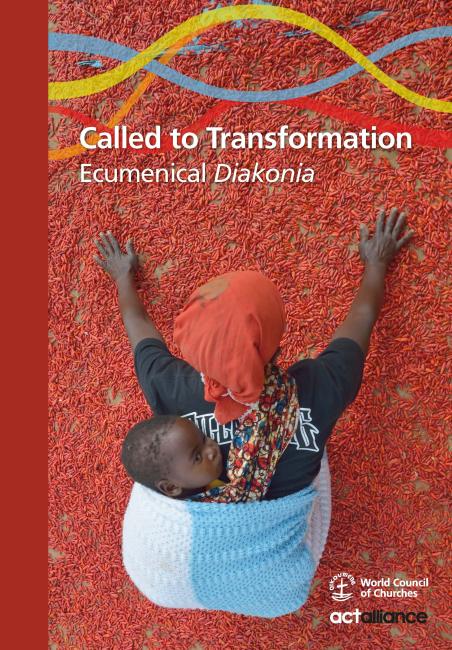 The joint publication, “Called to Transformation – Ecumenical Diakonia,” available online from now on, offers resources to strengthen the diaconal capacity of the churches and to advance the cooperation with specialized ministries.

“Writing of this document was a recommendation of the Malawi consultation in September 2014, when churches and specialized ministries’ representatives from all the continents gathered to reflect on the work they are supposed to do together,” said Prof. Dr Isabel Apawo Phiri, WCC deputy general secretary, presenting the publication.

Besides adding the geographic and confessional contexts of practicing diakonia, the study document also addresses the diaconal response to COVID-19 pandemic, including examples of diaconal ministry from every continent.

“With this publication, we now have a common understanding on diakonia – and that should take churches and their partners toward the next level of ecumenical cooperation in diakonia,” said Phiri, adding that after receiving the document in 2022, the WCC central committee has recommended that churches and specialized ministries all over the world use it.
END_OF_DOCUMENT_TOKEN_TO_BE_REPLACED END_OF_DOCUMENT_TOKEN_TO_BE_REPLACED