As Canadian parishes take up Pope Francis’ challenge to incorporate reconciliation into the life of the Church, particularly as we get closer to the National Day for Truth and Reconciliation on Sept. 30, there are liturgical options available for Sunday morning Masses in all kinds of parishes. The “sense of mystery” and awe Catholics should experience at Mass is not one prompted by Latin or by “creative” elements added to the celebration, but by an awareness of sacrifice of Christ and his real presence in the Eucharist, Pope Francis said.

“With this letter I simply want to invite the whole church to rediscover, to safeguard and to live the truth and power of the Christian celebration,” the pope wrote. “I want the beauty of the Christian celebration and its necessary consequences for the life of the church not to be spoiled by a superficial and foreshortened understanding of its value or, worse yet, by its being exploited in service of some ideological vision, no matter what the hue.”
END_OF_DOCUMENT_TOKEN_TO_BE_REPLACED END_OF_DOCUMENT_TOKEN_TO_BE_REPLACED The next meeting is scheduled for June 2017 in St. Louis, Missouri. In preparing for this meeting, cross-confessional pairings were formed. They are meant to engage with the following topics: the understanding of co-operation of the Church (“synergeia”) and sacrifice; the theological understanding of “time”, that is to say the relationship between the history of salvation and the “event” of salvation, or the issue of the realization of salvation in the liturgy; the understanding of sacrifice against the background of article 24 of the Augsburg Confession and its Apology, and in The Examination of the Council of Trent by Martin Chemnitz, looking also at the document “The Eucharist” (1978); and questions concerning the office of the ministry and ordination. Moreover, they plan to identify and describe areas of major agreement between the Roman Catholic Church and the churches in the International Lutheran Council. The resulting texts will serve to steer the further debates in the year to come, and secure the results of this informal dialogue.
END_OF_DOCUMENT_TOKEN_TO_BE_REPLACED END_OF_DOCUMENT_TOKEN_TO_BE_REPLACED The sharing of prayer texts and hymns between Christian denominations is a grassroots ecumenical encounter that can lead to deeper reflection and understanding.

That was the message brought to life at a workshop held Jan. 17 at St. Andrew’s Presbyterian Church to open this year’s De Margerie Series on Christian Reconciliation and Unity in Saskatoon, held in conjunction with the Week of Prayer for Christian Unity, Jan. 18-25.

Guest speaker Dr. Karen Westerfield Tucker led participants through an exploration of a number of prayers and hymn lyrics through history, in various traditions and styles, to demonstrate how theology is expressed in our most basic tools of worship. 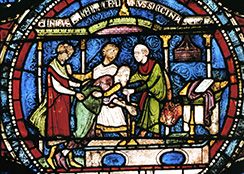 Without excluding liturgical celebrations according to the Roman Rite, the Ordinariate has the faculty to celebrate the Holy Eucharist and the other Sacraments, the Liturgy of the Hours and other liturgical celebrations according to the liturgical books proper to the Anglican tradition, which have been approved by the Holy See, so as to maintain the liturgical, spiritual and pastoral traditions of the Anglican Communion within the Catholic Church, as a precious gift nourishing the faith of the members of the Ordinariate and as a treasure to be shared.
END_OF_DOCUMENT_TOKEN_TO_BE_REPLACED END_OF_DOCUMENT_TOKEN_TO_BE_REPLACED

The outgoing president of the North American Academy of Liturgy and a leading Catholic liturgist has told The Catholic Register the most recent translation of the Roman Missal is “a step backwards” for ecumenical relations.

“It’s going to feel like the ecumenical movement has taken a hit,” Fr. Paul Turner, pastor of St. Munchin Church in Missouri and author of a half-dozen books on Catholic liturgy, said following an opening liturgy for the North American Academy of Liturgy annual meeting in Toronto Jan. 4.

New, more literal, translations from Latin of liturgical texts scheduled to hit parishes in two years are a departure from the Second Vatican Council’s movement toward common texts with Anglican, Lutheran and other churches, Turner said. Those common texts were a specific goal of council fathers in the 1960s, and non-Catholic scholars were consulted by Catholic liturgists and translators in the past.