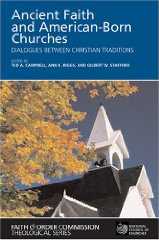 by Robert O’Connor, Chicago Tribune Last December, Rev. David Armstrong, minister of the First Limavady Presbyterian Church, performed what in most parts of the world would have been a little noted act of courtesy: He exchanged Christmas greetings with a neighbor, the pastor of the local Roman Catholic church. Last week he left town. He
END_OF_DOCUMENT_TOKEN_TO_BE_REPLACED END_OF_DOCUMENT_TOKEN_TO_BE_REPLACED

Ulster’s major unionist (and largely Protestant) party is refusing to form a four-party administration to govern Northern Ireland – including Sinn Fein, the radical republican party – because the Provisional Irish Republican Army (IRA) has refused to disarm, and because of apparent breaches of the outlawed group’s 1997 cease-fire.
END_OF_DOCUMENT_TOKEN_TO_BE_REPLACED END_OF_DOCUMENT_TOKEN_TO_BE_REPLACED

Children of the covenant?

“I want to transfer to the Presbyterian Church because in this denomination children matter.” I don’t remember the name of the speaker. It has been 20 years or so. But his words left their imprint.

We were proceeding through routine approvals of minister transfers in a stated presbytery meeting. Interest picked up when this longtime military chaplain, a Baptist, shared how his journey of faith had led him to the Reformed theological camp. “In my former tradition, we dedicated infants and educated children in the hope that they someday would profess faith in Jesus Christ. Upon their profession, they would get baptized and thereby be welcomed into the body of Christ. In the Reformed tradition you all baptize them into the body and educate them into personal faith. I think that’s the right sequence.”

As a fairly recent convert to Presbyterianism at the time, I found his words reassuring, especially so, since the one theological sticking point for me had been the practice of infant baptism. Exercising my office under the Presbyterian Church’s constitution, I had learned well how to present to parents the covenantal concept of baptism, rooted as it is in the practice of infant circumcision dating to the eighth day of Isaac’s life. But I still harbored some doubts about such a practice. This chaplain helped convert me into a passionate advocate of our denomination’s sacramental theology.
END_OF_DOCUMENT_TOKEN_TO_BE_REPLACED END_OF_DOCUMENT_TOKEN_TO_BE_REPLACED

“Scotland’s rich cultural and historical traditions have been shaped by outstanding saintly witnesses to Christ from various confessions”, he observed. “The present state of ecumenical relations in Scotland clearly shows that what we, as Christians, hold in common is greater than all that divides us. On this basis the Lord is calling us to seek ever more effective ways to overcome old prejudices and to find new forms of understanding and cooperation”.
END_OF_DOCUMENT_TOKEN_TO_BE_REPLACED END_OF_DOCUMENT_TOKEN_TO_BE_REPLACED