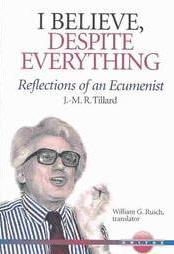 Catholic woman finds way to use gift of preaching

What do you do when you’ve been given the gift of preaching and you’re a Catholic woman? Marie-Louise Ternier-Gommers faced that dilemma. Ironically, she discovered her gift for preaching at the Lutheran Theological Seminary (LTS) where she enrolled in 1990 with the intention of taking a class or two to better equip her for the
END_OF_DOCUMENT_TOKEN_TO_BE_REPLACED END_OF_DOCUMENT_TOKEN_TO_BE_REPLACED

Devotion or division? Portraits of Mary in the Gospels of Luke & John

Our director, Rev. Dr. Jan Bigland-Pritchard, is available about once a month to preach in various churches. She will bring a message on Christian unity and reconciliation that will be of great benefit to all. If you wish to have her speak in your church, give us a call to arrange a date. Dates are
END_OF_DOCUMENT_TOKEN_TO_BE_REPLACED END_OF_DOCUMENT_TOKEN_TO_BE_REPLACED

Whereas the gaze of Simon the Pharisee (cf. Lk 7:36) – as Maria dell’Orto wrote – saw and judged, scrutinized and condemned, excluding people, Christ’s gaze set people on their feet, identified and recognized them. In so doing he invited all, both women and men, to discernment, to asking themselves questions and to communion. In this perspective a panoramic view of Christian history leads one to consider those prophetic and charismatic female figures who, by their personal authority, in turbulent centuries, contributed to evangelizing a still pagan world and/or a Church which was hostile and divided: Saints Genevieve, Clotilda, Joan of Arc, Hildegard of Bingen, Catherine of Siena…
END_OF_DOCUMENT_TOKEN_TO_BE_REPLACED END_OF_DOCUMENT_TOKEN_TO_BE_REPLACED