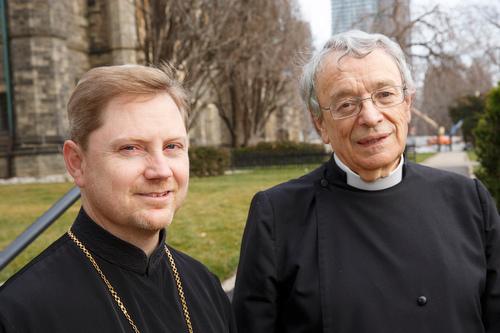 The Rev. Canon David Neelands, dean of divinity, says the enhanced Orthodox curriculum and the new students it will attract will benefit the college. “I think it’s a great development,” he says. “It will benefit us and a new population.”

Anglican students enrolled in Master of Divinity or Master of Theological Education programs at the college can take the Orthodox courses towards their degrees. “Orthodox historians and theologians have a lot to offer in terms of early church writers and history, and Anglicans have a long tradition of interest in Eastern Christianity – its icons, its spirituality and its authentic character,” says Canon Neelands.

The Anglican and Orthodox churches have a long history of mutual hospitality and learning. The late Bishop Henry Hill of the Diocese of Ontario devoted years to dialogue between the two churches. More recently, the Rev. Canon Alyson Barnett-Cowan and the Rev. Canon Philip Hobson have been involved in Anglican-Orthodox discussions.

Fr. Ready is hoping the Orthodox curriculum and scholarship at Trinity College will raise the profile of the Orthodox Church, which he calls a well-kept secret. “It’s partly our fault because we haven’t been engaging the world as we ought to have. One of the main benefits of having our seminary at a university is that it gives us the opportunity to engage with the world and really tackle modern questions.”

The Orthodox Church, also commonly known as the Eastern Orthodox Church, has between 225 and 300 million adherents worldwide, making it the second largest single Christian denomination. It is comprised of 14 self-governing churches that are in communion with each other. There are about one million Orthodox Christians in Canada, mainly belonging to the Greek, Russian and Ukrainian traditions.

Fr. Ready is hoping the Orthodox programs at Trinity will act as a bridge between the Orthodox Church and the Oriental Orthodox Church, which includes the Coptic, Armenian and Ethiopian traditions. The two churches are not in communion with each other. “We have both Eastern Orthodox and Oriental Orthodox lecturers on faculty, so we’re trying to bridge both families, which is another unique aspect of our program,” he says.

To celebrate the Week of Prayer for Christian Unity (Jan. 18-25), the Orthodox and Anglican traditions at the college will be holding an “Eastern Christian Service of Supplication for Christian Unity” in the college’s chapel on Jan. 29 at 7 p.m. The chapel is located at 6 Hoskin Ave., Toronto. All are welcome.