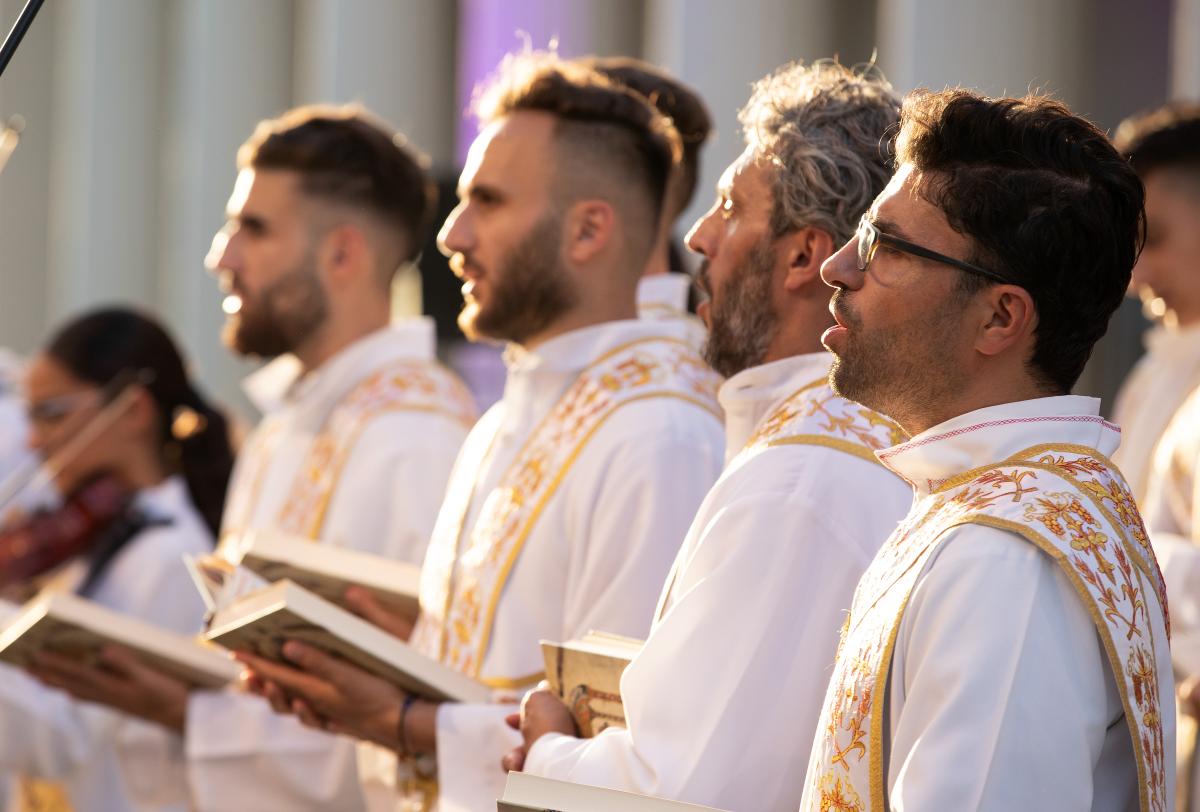 Members of the choir sing during a service of Oriental Orthodox evening prayer at the World Council of Churches' 11th Assembly in Karlsruhe, Germany. The assembly takes place August 31 to September 8 under the theme 'Christ's Love Moves the World to Reconciliation and Unity'. Credit: Mike DuBose/WCC ~ Sept. 6, 2022
Archives

The World Council of Churches (WCC) 11th Assembly says it is hearing the pleas of the heads of churches in the Holy Land more than ever before in relation to mounting intimidation, violations, limiting access to places of worship, and attacks by radicals.

In a statement from the assembly, the WCC noted that authorities are squeezing the Christian presence in Jerusalem, threatening the Status Quo and the multi-religious and multi-cultural identity of the city, along with displacing Palestinians.

The statement said the WCC looks to the Middle East region for “the historical origins of our faith where Jesus Christ was born, crucified and resurrected.”

The WCC affirmed the rightful place of Israel in the community of nations, recognizing its legitimate security needs.

“At the same time, we affirm the right of the Palestinians for self-determination and that the Israeli occupation of the Palestinian territories since 1967, as well as settlement construction and expansion in the occupied territories, is illegal under international law and must be ended.”

The worldwide ecumenical fellowship has always sought solidarity with the Middle East Christians, who continue an unbroken line of faithful Christian witness in their countries, making vital contributions to the vibrant diversity and development of their societies.

“Upheavals, violent extremism using religion as justification, ongoing military occupations, discrimination and systematic violations of human rights, economic crises and corruption, absence of the rule of law, and other factors have contributed to an existential crisis for all in the region.”

All people of the Middle East

“We recognize the threat to the future of the Indigenous Christians and of all the people of the Middle East,” reads the statement.

The WCC is committed to the principles of “God’s justice and love for all of creation, the fundamental rights of all people, respect for human dignity, solidarity with the needy and dialogue with people of other faith.”

The statement expresses concern over “another wave of forced displacement of Palestinian people from their homes—sometimes on multiple occasions since 1948—as in Sheikh Jarrah, Silwan, the South Hebron Hills, as well as in the rest of Area C,” said the WCC.

“The expanding Israeli settlements in the occupied Palestinian territories, especially those encircling East Jerusalem, are illegal under international law and threaten fundamental demographic and political changes to the region.”

The statement said they have so undermined realistic prospects of a two-state solution “that this path towards a just peace now seems increasingly unviable.”