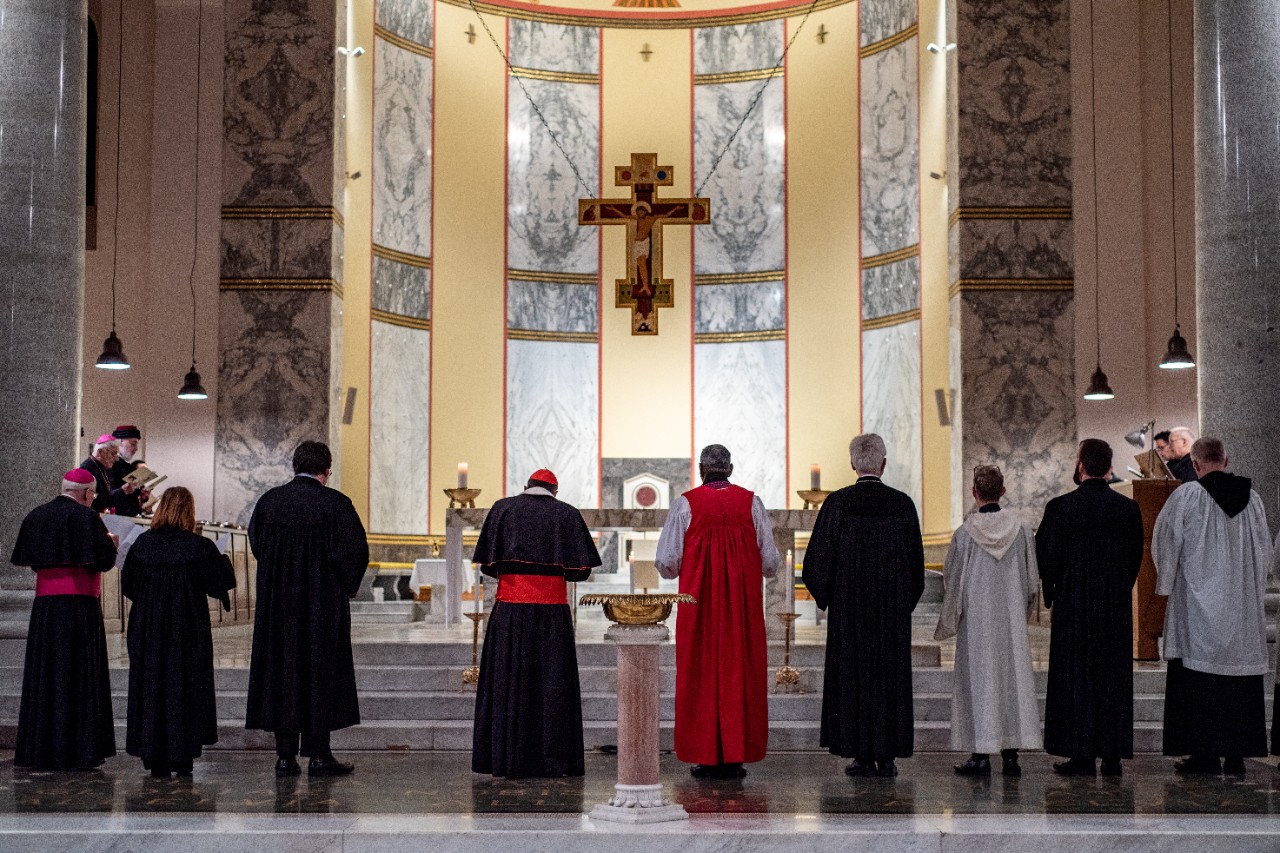 On 22 November, an ecumenical service was held in the basilica of the Sant'Anselmo Benedictine Abbey in Rome. Representatives of each of the four world communions and others in leadrship of the event are pictured here during the service. At the centre is a baptismal font used to commemorate our common baptism. The text of the Joint Declaration is seen on a lectern placed before the altar.
from the Pontifical Council for Promoting Christian Unity

On Friday, 22 November 2019, an ecumenical prayer service including a commemoration of common baptism was held in the basilica of the Sant’Anselmo Benedictine Abbey in Rome.

The event marked the 20th anniversary of the Joint Declaration on the Doctrine of Justification signed on Reformation Day 1999 (31 October) by the Lutheran World Federation and the Catholic Church. A facsimile of the document was placed on a lectern in the apse of Sant ̍ Anselmo.

The Joint Declaration was subsequently approved by the World Methodist Council, the World Communion of Reformed Churches and the Anglican Communion.

The prayer service in Sant’Anselmo was conducted following the liturgical order drawn up by the Lutheran World Federation and the Pontifical Council for Promoting Christian Unity for the international anniversary celebrations.

The historical baptismal font dating from 1832, originally donated for use in the chapel of the Protestant embassy, was used for the common baptismal commemoration in Rome. The baptismal font is inscribed with the verse of a baptismal poem by Pope Sixtus III (fourth century) which is also engraved on the architrave of the Baptistery of the Lateran Basilica.

Present alongside Cardinal Kurt Koch and Bishop Brian Farrell of the Pontifical Council for Promoting Christian Unity were Dean Heiner Bludau of the Evangelical Lutheran Church in Italy and Reverend Michael Jonas of the Evangelical Lutheran Church in Rome. Pastor Olof Olsson represented the parish of the Swedish Lutherans. The Anglican Communion was represented by Archbishop Ian Ernest, the United Methodist Church by Pastor Mirella Manocchio, with Pastor Emanuele Fiume of the Waldensian community representing the Reformed tradition.

The Abbot Primate of the Benedictine Confederation, Abbot Gregory Polan, OSB, who provided a spiritual reflection during the worship, also welcomed a delegation of American Lutherans together with Bishops Guy Erwin and Lowell G. Almen.

A special joy was the presence of the Joint Commission for Theological Dialogue between the Catholic Church and the Assyrian Church of the East under the leadership of the two Co-Chairs, His Beatitude Mar Meelis Zaia, Metropolitan of Australia, New Zealand and Lebanon, and Bishop Johan Bonny from Antwerp (Belgium).