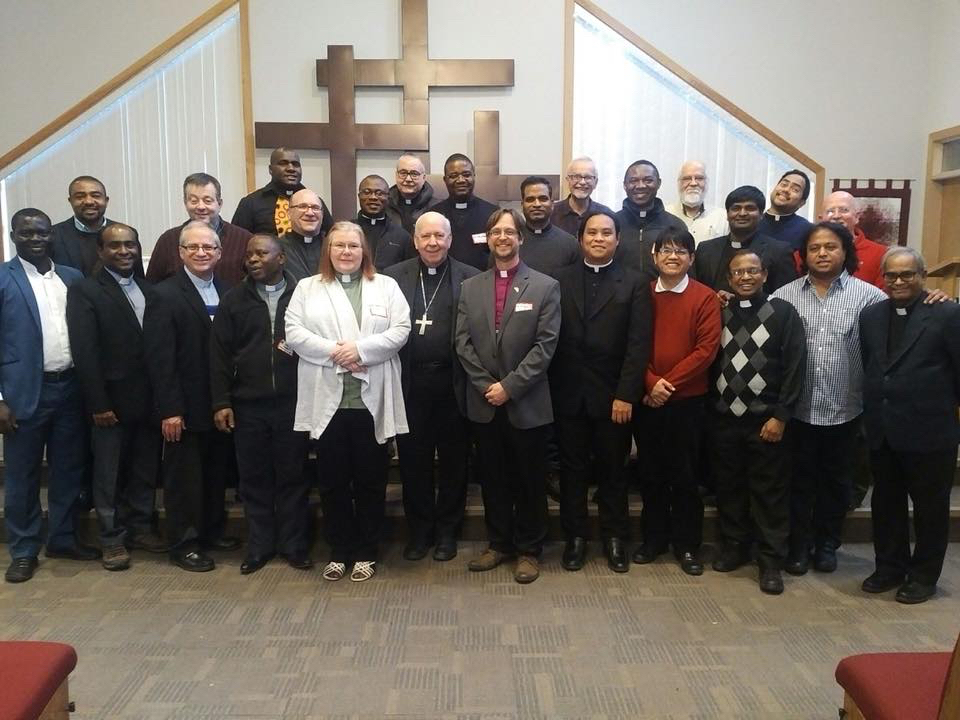 Anglican and Roman Catholic clergy at their one-day ecumenical conference in Slave Lake, Alta., Nov. 15, 2017. Wearing the purple shirt, in the front row, is Fraser Lawton, bishop of the diocese of Athabasca; to his right is Gérard Pettipas, archbishop of the Roman Catholic archdiocese of Grouard-McLennan. Photo: Contributed
By Tali Folkins, Anglican Journal

“We thought it went very well, and I think the clergy found it quite valuable,” says Bishop Fraser Lawton, of the diocese of Athabasca. “I think they appreciated just getting to know one another.”

“Everybody was saying, ‘This is great—we should do this again’,” says Archbishop Gérard Pettipas, of the Roman Catholic archdiocese of Grouard-McLennan. “There’s enough similarity that we understand one another. I’ve been to ministerial meetings where the whole tone and spirit of the meeting feels quite foreign because they have a different spirit, and when we’re together with the Anglican clergy I feel that there’s somehow a recognition that we do share a lot of tradition together and we do share a common spirit.”

They also face similar challenges, say Lawton and Pettipas, including difficulties involved in ministering to vast, sparsely populated territories and the decreasing ability of some parishes to continue to support themselves, especially in communities with shrinking populations.

“Church attendance has dropped as the very presence of people in many of these small communities has dropped,” Pettipas says. “And so, you’re facing the real dilemma, ‘Is this particular parish able to survive? Or should we just accept the fact and close it?’ This is what I face, and this is what they face as well.”

Pettipas says one hope he has for future meetings between the two territories is the sharing of insights into ministry to Indigenous people. Non-Indigenous priests, he says, sometimes find it hard to know how to minister most effectively to Indigenous people, because of their unique situation, culture and history.

“That could probably be a very rich conversation,” he says. “Are there things that we have learned in our ministry that would be helpful to our counterparts in the other church?”

A similar meeting is planned for this November, the two bishops say, although it’s too early to say whether it will become an annual event.

The idea for last year’s meeting arose out of an informal lunch meeting between the two. Pettipas says he noticed his counterparts in other Roman Catholic dioceses holding clergy meetings and prayer sessions with other denominations, and thought something similar might work for Anglicans and Roman Catholics in northern Alberta.

The Anglican diocese of Athabasca spans northern Alberta; the Roman Catholic archdiocese of Grouard-McLennan covers much of the same territory but is smaller, extending westwards from Slave Lake rather than the Saskatchewan border.