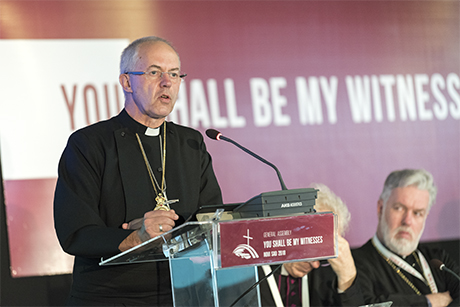 The Archbishop said that Christians had been in Europe since halfway through the first century and through that time had survived many persecutions from the Roman Empire to post World War II Eastern Europe. He told members of the Assembly that he and his wife smuggled Bibles into Romania and what was then Czechoslovakia.

“Christianity in Europe does not depend on the organisation or governance of the Church, nor does it depend on the virtue of Christians, or the blessing of circumstances, he said. “It is assured because it depends on the God who raised Jesus Christ from the dead.

St Augustine of Hippo, write his book De Civitate Dei contra paganos – City of God – in the aftermath of the sacking of Rome by the Goths in AD 410, Archbishop Justin said. “For Augustine the fall of Rome showed the specious nature of putting faith in the earthly city. For Augustine the benefit of being a Christian is citizenship of an eternal city. This comes through faith in Christ.

“That cannot lead to complacency. The fact that Christianity survived in Europe does not indicate that it is indestructible, but that God protects the Church that he created and loves. Christian survival within Europe is not an objective of the Church, rather it should be for the Church to be obedient to the pattern of Christ, to be Christ’s hand, mouth and love in this world today.

“Jesus told his disciples that they were to be salt and light (Matthew 5: 13-16), both the means of preserving the society in which the Church exists and also the source of illumination that reveals both shadow and truth, that unveils what seeks to be hidden, and illuminates what inspires. For the Church to be effective and to continue to be blessed by God, it must speak truth to the societies that it sees around it and act in a way that is consistent with the truth it speaks.”

He said: “History would indicate, and the command of Jesus direct, that the Church is first to seek to be a holy community, based in order, in mutual love, in humility, service and hospitality. That all sounds good and harmless, but it is in fact something that runs directly contrary to much of what we see going on in Europe today.

“Populist calls to preserve our way of life against the other, to put up walls and barriers, to smother dissent and disagreement, to ignore international obligations recognised as morally binding since Jesus spoke of the Good Samaritan, all these will be deeply challenged and will be hostile to a church that is truly itself hospitable.

“On the very small stage of Lambeth Palace in London, where we welcomed a Syrian Muslim family of refugees, driven from their homes under shellfire, wounded and harried, the hate mail we received demonstrated the unpopularity even of small gestures.

“The Church breaks across boundaries and frontiers as if they did not exist. By being in Christ, I am made one by God in a family that stretches around the world and crosses cultural, linguistic and ecumenical frontiers, driven by the Spirit who breaks down all the walls that we seek to erect.”

He stressed the importance for churches to be reconciled, and said that he values greatly the Conference of European Churches and the work of ecumenism. He said that reconciliation “was “immensely costly, for it involves paying for sin, and was only created by the death of Christ on the cross.

“It is a journey of generations, for our historic resentments and hatreds rise in rebellion within our hearts. It is not agreement on all things, for that is impossible, but the acceptance of diversity, even disagreement and yet love in all things.

“Let us be the peace makers of Europe, for in making peace we will demonstrate the presence of Christ to those who do not see Him, and we will be the present taste of Christ in a world of individualism, conflict, manipulation and hatreds.

“It is no longer the case that to be English is to be Anglican, to be French is to be Catholic, to be Swedish is to be Lutheran, to be Romanian is to be Orthodox. There are Catholics and Protestants, Orthodox and Anglican, Pentecostal and Evangelical Christians in all our countries. For that matter, there are also Muslims, Hindus, Buddhists, and many of no faith at all. That diversity is one of the gifts of the Europe of the EU, but to live with that diversity must call for the gift of reconciliation through the church.

“The more that people are gripped by fear of the other, and the more that those fears are played on and manipulated by political leaders, the more the Church is to exist in witness and presence demonstrating the hospitality, the humility, the service and the love in a disciplined and virtuous life.”