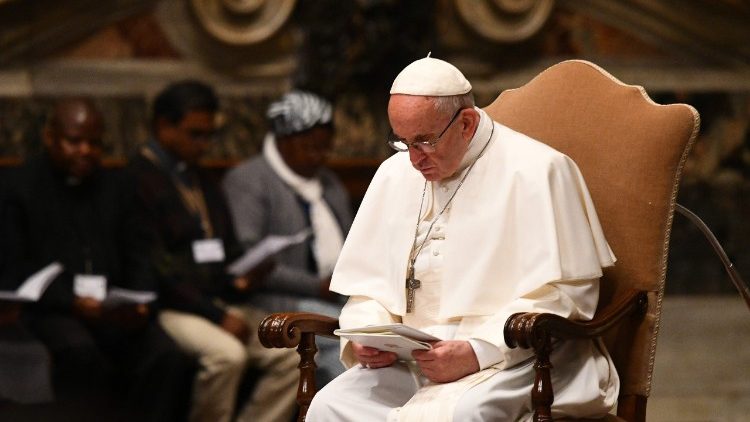 Pope Francis prays for peace in South Sudan and the DRC in November 2017
By Philippa Hitchen, Vatican News

The Pontifical Council for Interreligious Dialogue is urging members of all different religious traditions to support Pope Francis’ call for a day of prayer and fasting for peace on February 23rd.

Speaking at the recitation of the Angelus prayer last Sunday, the Pope invited all women and men of goodwill to join him in praying for an end to violence and conflict, especially in South Sudan and in the Democratic Republic of Congo.

Addressing the crowds gathered in St Peter’s Square, the Pope said: “Faced with the tragic protracted situations of conflict in different parts of the world, I invite all the faithful to take part in a special Day of Prayer and Fasting for Peace”.

Noting that February 23rd falls on a Friday during the first full week of Lent, the Pope asked people to pray especially for those suffering violence in the DRC and in South Sudan, where political unrest and a protracted civil war continues to claim thousands of lives.

Say no to violence

Pope Francis said: “Everyone, in their own conscience, before God, should ask ‘what can I do for peace?'” “Surely, we can pray”, he said, “but not only: each one of us can say ‘no’ to violence in their own way”.

A statement from the Pontifical Council for Interreligious Dialogue on Tuesday stressed that the Pope specifically asked members of other faiths to join in the initiative in any way they can. Highlighting the vital role that religions play in achieving and consolidating peace, the statement urged members of other faith communities to take up the appeal and to join in “moments of prayer, fasting and reflection, according to their own traditions and in their own places of worship”.