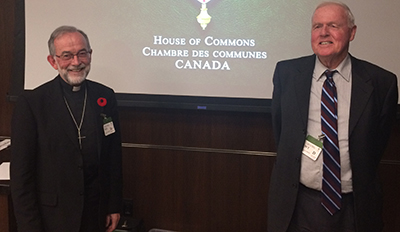 Most Reverend Lionel Gendron, P.S.S., Bishop of Saint-Jean-Longueuil and President of the CCCB and Mr. Bruce F. Simpson, a partner specializing in criminal law with Barnes Sammon LLP
CCCB Media

The Conference also intervened on 30 October 2017 concerning Clause 14 of Bill C-51, which included a written submission to the House of Commons’ Standing Committee on Justice and Human Rights, followed by oral presentations before the Standing Committee by the Most Reverend Lionel Gendron, P.S.S., Bishop of Saint-Jean-Longueuil and President of the CCCB and His Eminence Thomas Cardinal Collins, Archbishop of Toronto, with the assistance of Mr. Bruce F. Simpson, a partner specialized in criminal law with Barnes Sammon LLP.