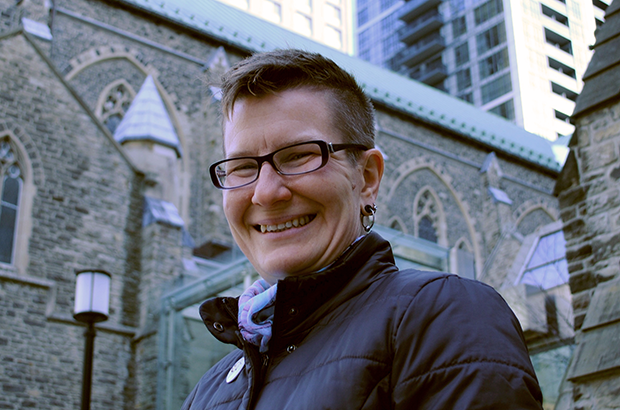 “I really believe that God is working resurrection among us,” says the Rt. Rev. Jordan Cantwell, elected last summer as moderator of the United Church of Canada. Photo: Tali Folkins
By Tali Folkins, Anglican Journal

Fresh out of a meeting in Toronto this week with Archbishop Fred Hiltz, primate of the Anglican Church of Canada —their first official meeting since her election last summer—the Rt. Rev. Jordan Cantwell was brimming with enthusiasm.

“We could’ve talked for three times as long,” she said in an interview. “We had about an hour and a half to talk, and we were just getting going, and Bruce says, ‘Well, we have five more minutes,’ ” Cantwell said, referring to Archdeacon Bruce Myers, the Anglican church’s co-ordinator for ecumenical and interfaith relations.

The first thought that went through her head on hearing that was, “What? We’ve only talked about one thing—we’ve got so much more!” Cantwell said. “So yeah, it was wonderful.”

The main topic of their conversation, Cantwell said, was the episcopé, the ministry of oversight—“how that’s exercised in our different churches, and what would the path towards mutual recognition of ministries, or of full communion, or just of deeper union or deeper co-operation look like…what are the barriers, what are the opportunities,” she said.

Earlier that day, Cantwell had preached a sermon at a special Epiphany service, featuring United Church hymns, in the national church offices’ chapel in Toronto.

“I’m excited by the conversations that we had today,” she said. “You know, there was a bit of a lull after the discussions in the ’70s sort of fell apart, but it’s picking back up…I think that we’re on an upswing in our ecumenical relations. And I think that’s a great thing.”

In 1975, a plan to formally unite the two churches, approved by the UCC’s General Council, fell through after the Anglican church’s General Synod voted against it—leaving UCC members feeling “left at the altar,” as Myers has put it. But formal dialogue began again in 2003—and, meanwhile, a lot has been going on informally, Cantwell says. A number of congregations in Canada, for example, have been sharing clergy despite the discomfort some Anglicans have expressed about the administering of sacraments by non-ordained Anglican priests.

“On the ground, there are places where folks have just not allowed that to be a barrier,” Cantwell said. “They’ve just sort of said, ‘Well, we find life and richness in sharing ministry with one another, and so that’s what we do!’ which is a marvelous witness.”

Cantwell—who had just returned from meeting with Protestant churches in China and noted that they referred to themselves as “post-denominational”—said ecumenism is one of her passions. It’s also one of her three top priorities as moderator, she said, together with fostering reconciliation and right relationships within and beyond the United Church, and encouraging the growth of youth and adult ministry.

The two churches’ common history of involvement in the Indian residential school system and their common desire to work out a new relationship with Indigenous people have already brought them closer together, she says—and that is likely to continue. Cantwell noted, for example, that both churches are now in the process of exploring with their Indigenous members what kind of organizational changes might be needed in order for Indigenous congregations to have more autonomy. This, she said, is something the UCC and the Anglican church might benefit greatly from working on together.

The two churches and other parties involved in the Indian residential schools system have also committed to meeting several times a year to follow up on the Truth and Reconciliation Commission’s 94 Calls to Action.

Hiltz agreed the meeting had been both enjoyable and fruitful. There’s currently “new life” in the United Church-Anglican dialogue, he said, particularly in the area of mutual recognition of ministries.

One interesting thing the two spoke about, Hiltz said, was the idea that the two churches, in their formal dialogue with one another, might draw more heavily on the on-the-ground experiences of ecumenical shared ministries.

“That was good—that was very good,” he said. “To move that way is a recognition and an affirmation for the ecumenical shared ministries and the way people have really diligently worked hard together—not without, in some cases, some struggle…But they make it happen.”

Local experience of ecumenism “has to be lifted up and held alongside all the formal dialogues and the agreed statements and the plans of union,” Hiltz said. “That was a very exciting piece that came out of the conversation, from my point of view.”

They also discussed, he said, the possibility of having more members of each church serve on the other church’s committees.

And the two churches, he agreed, could also benefit greatly from working together to implement the 94 Calls to Action of the Truth and Reconciliation Commission.

Although it will not affect their formal relationship, Cantwell said, many individual members of the UCC—including herself—will be watching the Anglican church’s vote on same-sex marriage this summer very closely.

Cantwell is gay, and her own life journey has been intimately affected by church positions on sexuality. Raised primarily in the Anglican tradition, she left the church in her 20s, after concluding its position on the ordination of gays would not allow her to follow her vocation without lying about who she was.

“In my early 20s I came out, and I knew already at that point that I was called to the priesthood,” she said. “I had already spoken to the bishop—there was already a plan in place—and then I came out. And at that time—I know in places this has changed, but at that time what I understood was that if I wanted to be a priest, if I was going to pursue that, then I needed to make a choice either to remain celibate and not in relationships or to lie about who I am and to keep that under wraps, to hide that, or to let go of that dream.

“And I thought, ‘Well, I’m pretty sure that God hasn’t made me a lesbian to lie about it.’ And I also felt like if I couldn’t bring my whole self to ministry, I wasn’t going to be much of a minister. So I thought, ‘Well, I can’t be a priest in the Anglican Church.’ It was at that point that I left the church— pretty hurt, I have to say. But I just felt I knew that I was called and I knew that I was being stopped in that call,” she said.

“I’ve often said, ‘Thank goodness I came out,’ because it’s made me a much more compassionate and, hopefully, humble person to have gone through that,” she said. “Not that I recommend going through that as a path to ministry—it’s not fun and it’s not necessary…As a learning tool, it’s a hard one.”

Nevertheless, she said, she has “a great affinity for—love for—the Anglican church.”

Cantwell said she would like to see churches “begin to let go of our despair, our depression that has sort of set in as we say ‘Ah, we’re declining,’ and, you know, ‘We’re closing churches.’

“The central story of our faith is one of resurrection, and we know that resurrection can only happen in the presence of death. And I really believe that God is working resurrection among us.”