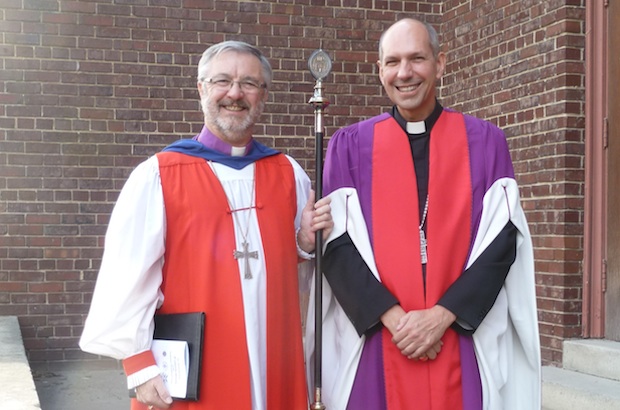 The Anglican-run University College of Emmanuel and St. Chad has awarded an honorary fellowship to the seventh bishop of the Roman Catholic Diocese of Saskatoon, Donald Bolen.

Bolen, 53, a well-respected ecumenist in Canada and internationally, received the honour May 9 in recognition of his work in building Anglican-Roman Catholic relations, according to a press statement. Anglican Diocese of Saskatoon Bishop David Irving, who is also the university’s chancellor, presented the award during the 13th Joint Convocation of the Saskatoon Theological Union, where Bolen was the convocation speaker.

In a telephone interview, Bolen said it was “a great privilege and a great delight,” to have been bestowed the award. “It’s been a great joy to work with Anglicans to foster reconciliation,” said Bolen. There is a “deep bond of friendship and deep relations between Anglicans and Roman Catholics. We hold so much in common that it’s a lovely field of ecumenism to work in.”

In Canada, he co-chairs the Anglican-Roman Catholic dialogue, along with his Anglican counterpart, Bishop Linda Nicholls, area bishop of Trent-Durham, diocese of Toronto.

In Saskatoon, Bolen and Irving – who were both installed as bishops in March 2010– have struck a close friendship and are involved in a number of ecumenical projects in Saskatoon.

Their work reflects the strong ecumenical tradition of Saskatoon, said Bolen, noting the pioneering work of the Prairie Centre for Ecumenism, which was established in 1984.

“It comes down to individual people who had a passion for ecumenism,” explained Bolen. “The city was founded as a temperance colony but the idea was that it would be a Christian society, so there are strong roots of Christian faith in the region and there was a sense already that Christians from different communities needed to work together.” Among the pioneers was Fr. Bernard de Margerie, a Catholic priest in Saskatoon and founder of the Prairie Centre for Ecumenism. De Margerie was a newly-ordained priest at the time of the Second Vatican Council and was inspired by its call to foster reconciliation among Christians, said Bolen.

His own personal interest in ecumenism stems from Jesus’ prayer that all his disciples may be one, [John: 20-21] said Bolen. His interest in reconciliation was strengthened in the 1990s while studying at Oxford: his supervisor was heavily involved in Anglican-Roman Catholic relations. Bolen decided to make it the focus of his doctoral thesis, which later led to his work at the Vatican.

Originally from Gravelbourg, Saskatchewan, Bolen also studied English and Religious Studies at the University of Regina. He entered Saint Paul Seminary in Ottawa for the Archdiocese of Regina in 1986, and completed a bachelor of theology, a master of theology, and a licentiate of theology at Saint Paul University. He undertook post-graduate studies at Oxford University from 1994 to 1997.