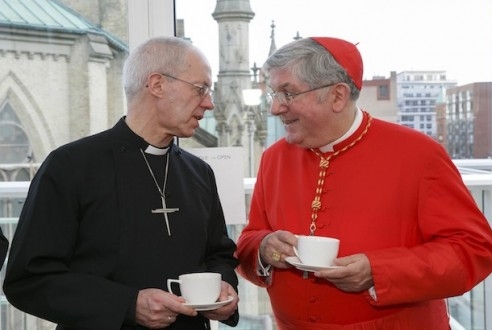 Archbishop of Canterbury Justin Welby has underscored the value of continuing ecumenical dialogue at a “passionate theological level” while at the same time having “a closer relationship of action” that addresses the needs of the world in such areas as poverty and social justice.

Ecumenism must be “something that is our burning desire,” Welby told a gathering of ecumenical guests at a reception at Toronto’s St. James’ Cathedral Centre, during his “personal, pastoral visit” to the Anglican Church of Canada April 8 to 9. “In the last seven verses of John: 17, Jesus prays with extraordinary passion and extraordinary directness about the absolute necessity of the visible unity of the church… Love one another…”

In a divided and diverse world, Welby said the church could demonstrate “how humanity can overcome its cultural divisions and truly be… a holy nation of God’s people.”

In different parts of the world, there has been “a new movement of the spirit,” said Welby. He cited a decision by Chemin Neuf, a Jesuit-founded French Catholic community with an ecumenical vocation, to accept his invitation to take up residence in Lambeth Palace.

Last January, four members set up “a fraternity” in Lambeth Palace. “We hope that is something that will grow and develop,” said Welby, adding that he and his wife, Caroline, got to know the community over the last seven years. (The archbishop’s spiritual director is a Swiss Roman Catholic priest, Fr. Nicholas Buttet.)

The Guardian newspaper has noted that the move breaks five centuries of Anglican tradition and ushers “a further rapprochement between the churches of England and Rome.”

Welby also noted that his relationship with Archbishop of Westminster Vincent Nichols has been “very, very warm,” and that they meet regularly on Sunday afternoons. They recently launched Listen to God: Hear the Poor, a special week of prayer for Christian social action.

“Everything we do in church has to be rooted in theology, theological anthropology and ecclesiology. Those are things we cannot and must not avoid,” said Welby. But at the same time, he said, Christians must draw on “the riches that God has given us.” He noted how Catholic social teachings have been “formative influences of my own thinking in terms of the ministry of the church, and the most powerful one from which I’ve learned and continue to learn.”

In his remarks, Archbishop Fred Hiltz, primate of the Anglican Church of Canada, noted that Welby has made a commitment to ecumenical dialogue “and furthering the realization of our Lord’s prayer that we may all be one.”

In his first year of ministry, the Archbishop of Canterbury has named as priorities “evangelism, resurgence of prayer and religious life in the church, and reconciliation,” said Hiltz. “At the heart of reconciliation [is] reconciliation within his own church… with the Anglican Communion… with the whole church.”

Archdeacon Bruce Myers, co-ordinator for ecumenical and interfaith relations at the Anglican Church of Canada’s General Synod, said he welcomed Welby’s reminder that “we, as divided churches, must continue to painstakingly work out the knots of our theological differences while at the same time giving practical expression to the unity we already share by engaging together in mission.”

Myers said the fact that Welby set aside time in his tight schedule to meet with the Anglican Church of Canada’s ecumenical partners is “a measure of the value he, our church and our communion place on being attentive to our relationships with other Christians.”

The gathering also gave the Anglican church’s partners “a glimpse of what it means for Canadian Anglicans to be a part of a worldwide family of churches like the Anglican Communion, and why that’s an important aspect of our identity.”

Before the reception, Welby and the ecumenical guests gathered for vespers at the historic Cathedral Church of St. James.

The ecumenical guests included the Roman Catholic Archbishop of Toronto, Cardinal Thomas Collins; Nora Sanders, general secretary of the United Church of Canada; the Rev. Stephen Kendall, principal clerk of the Presbyterian Church in Canada; Lt. Col. Jim Champ, of the Salvation Army, who is also president of the Canadian Council of Churches; and the Rev. Karen Hamilton, general secretary of the Canadian Council of Churches.

Also present were Archbishop Colin Johnson, of the Anglican diocese of Toronto and metropolitan of the ecclesiastical province of Ontario; and the Very Rev. Douglas Stoute, dean of Toronto.