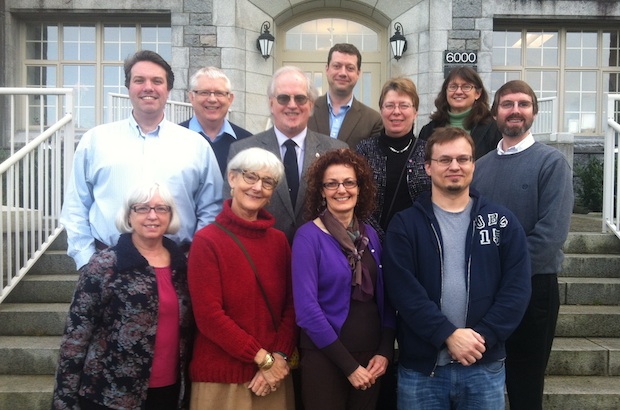 “Both friendly and intense”—that’s how the Rev. William Harrison describes the latest phase of the dialogue between representatives of the Anglican Church of Canada and the United Church of Canada after the last of three annual meetings wrapped up at the Vancouver School of Theology on Jan. 16.

Harrison, the group’s Anglican co-chair, said the participants from both churches have prepared an interim report, which has to be submitted the Anglican Church of Canada’s Council of General Synod (CoGS) for its next meeting in May before it can be discussed in detail. In the meanwhile, he answered a few questions from the Journal by email about the latest meetings and their progress.

In keeping with a resolution from the 2010 General Synod of the Anglican Church of Canada, and with the agreement of the United Church’s Theology and Inter-Church Inter-Faith Committee, these most recent talks have focused on  “the doctrinal identities of the two churches and the implications of this for the lives of the churches—including understandings of sacraments and orders of ministry.”

“Both sides have been willing to engage and ask tough questions,” Harrison wrote. “Where the previous phase focused on what we have in common, this phase has been more inclined to recognize differences. The result is that we have challenged one another and ourselves.” The previous dialogue took place over six years and ended in 2009. Those conversations were described in Drawing from the Same Well: The St. Brigid Report.

In spite of those differences, Harrison wrote, “We found that on core theological commitments (as expressed in the Nicene and Apostles’ Creeds, for example) we are really in much the same place, facing common challenges.  Our differences on these matters tend to be more in the realm of how we do theology than in the things that we affirm.”

When asked about what might come next in the dialogue, Harrison pointed to the theology of ordination. Questions that could be considered include, “How similar/different are our understandings of ordained ministry? What does the ordination rite accomplish? What is the work of the ordained? What is their place in the life of the church?”

Harrison mentioned the discussion of eucharistic prayers as a high point for him, personally. “As an Anglican, I am vividly aware of the difference between our tradition that insists upon communally-authorized liturgies and the United tradition that gives the presider freedom to compose a liturgy.” He said he was “pleased and surprised” when a United Church member pointed out the instructions for creating a eucharistic prayer in a United Church worship resource.  “The instructions include all of the elements of a eucharistic prayer as we understand and expect such a prayer,” Harrison said.

Harrison noted that there is overlap between the two denominations. “Some Anglicans sound more United, while some United Church members sound quite Anglican.”

Though some talks regarding shared ministries continued for a few years, the churches agreed to set aside discussions for a time, though they worked together collaboratively in the peace and justice coalitions that eventually became Kairos and through organizations such as the Canadian Council of Churches and the World Council of Churches, Myers said. In 2003, the Anglican church reached out to the United Church and they began a new ecumenical dialogue.

The members of the dialogue are: