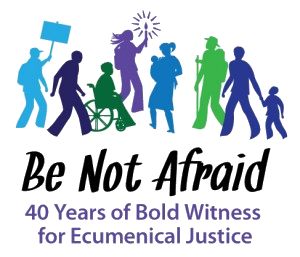 KAIROS, the Canadian Ecumenical Justice Initiative, is celebrating a 40th anniversary. KAIROS itself isn’t that old, but its predecessor groups, the Canadian ecumenical coalitions are. Those of us engaged in ecumenical work, whether in theological dialogues, ecumenical education, or collaborating in advocacy for social justice are rooted in the same call to witness to Christ and to engage in common mission. We give thanks for the work of the Canadian social justice coalitions and for KAIROS that continues to give witness to this legacy. Congratulations KAIROS on 40 years of witness!

The executive director of KAIROS, Jennifer Henry, gave a long sermon January 19th at St. Matthew’s Anglican Church in Etobicoke. She reflects on ‘40 Years of Bold Witness’ framing her thoughts with four characteristics of the “natural habitat’ of prophetic voices” outlined by Walter Brueggemann in “The Prophetic Imagination.” It is well worth a read for Jennifer’s strong knowledge of history and inspirational passion for justice.