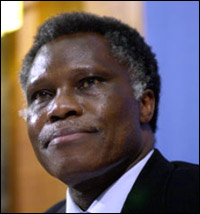 From September 30th until October 4th, The Rev. Dr. Samuel Kobia, General Secretary of the World Council of Churches, will be paying his first official visit to the churches of Canada.

Dr. Kobia will begin his visit in Winnipeg where he will give a public lecture on the topic of ‘Ecumenism in the 21st century’ at the University of Winnipeg. In the afternoon of September 30th he will meet with aboriginal leaders.

In Toronto, Dr. Kobia will meet with various church houses and speak at a dinner for the church leaders of Canada. On Saturday, October 2nd, he will give the theme address at a public lecture, at 10:00 a.m., sponsored by Toronto School of Theology and the Canadian Centre for Ecumenism at Emmanuel College, Toronto School of Theology. The topic of his address will be ‘The Impact of Inter-Faith Relationships on the Theology and Practice of Classical Ecumenism’.

In Ottawa, on Sunday, October 3rd, which is World-wide Communion Sunday, Dr. Kobia will be in morning worship at Parkwood Presbyterian Church. He will then be the guest preacher at a special, public, ecumenical service at 4:00 p.m., in Southminster United Church, hosted by the congregation of Southminster United Church and the Parish of Trinity Anglican Church with the representation of the Canadian Council of Churches.

Dr. Kobia will give the opening remarks at the Forum on Ecumenical Dialogues, Monday, October 4th, an event taking place at Southminster United Church, hosted by the Commission on Faith and Witness of the Canadian Council of Churches.

A biography of The Rev. Dr. Samuel Kobia

Born 20 March 1947 in Miathene, Meru, Kenya, the Rev. Dr Samuel Kobia was elected general secretary of the World Council of Churches in August 2003, and took up his new post in January 2004. From 1999 to end-2002, he was the director of the WCC Cluster on “Issues and Themes”, and in 2003 served as director and special representative for Africa of the WCC. Dr Kobia is from Kenya, and is an ordained minister in the Methodist Church in Kenya.

He gained a Diploma in Theology at St Paul’s United Theological College, Kenya, as well as a Diploma in Urban Ministry from McCormick Theological Seminary, USA. In 1978, he obtained a Masters degree in City Planning (MCP) at the Massachusetts Institute of Technology (MIT), USA. In 1993, he was awarded a degree of Doctor of Divinity by the Christian Theological Seminary, Indianapolis, USA, and in 2003 received a PhD in Religious Studies from Fairfax University, Louisiana, USA.

From 1978 to 1984, Dr Kobia was WCC executive secretary for Urban Rural Mission. In addition he served as secretary of the WCC Africa Task Force. In 1984, he returned to Kenya to become director of church development activities with the National Council of Churches (NCCK), advising NCCK member churches on the formulation, implementation, management and evaluation of development projects. In September 1987 Dr Kobia was appointed NCCK general secretary. Returning to Geneva in August 1993, Dr Kobia took up the post of executive director of the WCC’s Unit III – Justice, Peace and Creation. In 2000, he spent a sabbatical as a fellow at the Center for the Study of Values in Public Life at Harvard Divinity School, Harvard University.

Among his many social and political and ecumenical involvements, Kobia helped reorganize the Zimbabwe Christian Council after independence (1980-81), chaired the Frontier Internship in Mission (FIM) International Coordination Committee (1981-85), was vice-moderator of the Commission of the WCC Programme to Combat Racism (1984-91), helped found the Nairobi Peace Group (1987) and the Fellowship of Councils of Churches in Eastern and Southern Africa (FOCCESA), chaired peace talks for Sudan in 1991, and in 1992 chaired Kenya’s National Election Monitoring Unit.

Along with Origins of Squatting and Community Organization in Nairobi (1985) – a revised version of his masters thesis published in book form, and Together in Hope, the official report (1990) of the NCCK conference on the mission and calling of the church in Kenya, Dr Kobia has written two books focusing on Africa. The Quest for Democracy in Africa (1993) considered the conditions under which democracy in Africa might succeed or fail; The Courage to Hope (2003) is a result of many years of collective struggle to come to terms with Africa’s dilemmas.

Dr Kobia is married to Ruth, and they have two daughters, Kaburo and Nkatha, and two sons, Mwenda and Mutua.