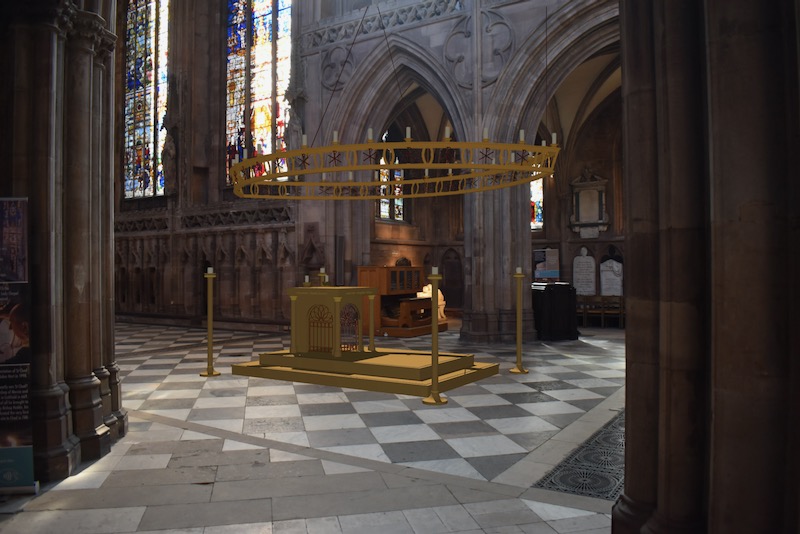 A relic of St Chad is due to transferred from Birmingham to Lichfield cathedral tomorrow as a shrine of St Chad is reinstated in the location of the original medieval shrine.

St Chad, a monk and abbot, moved his see from Repton to Lichfield when he was made Bishop of Mercia in 669. He died just three years later in a plague. He became associated with healing, until his relics had to be moved during the Dissolution. They were eventually enshrined at St Chad’s new Catholic cathedral in Birmingham when it opened in 1841, in a new ark designed by Pugin.

The return of the relic to Lichfield is being regarded as a gesture of unity between the Catholic Church and Church of England.

Read the complete article in The Tablet

Archbishop of Birmingham Bernard Longley said: “I am very grateful that our pilgrimage together as Anglicans and Roman Catholics has been strengthened by our common devotion to the memory of St Chad, as a share of his relic returns to Lichfield Cathedral. St Chad reminds us of the unity we already enjoy through our baptism and faith in Christ – he encourages us to pray and work for the fullness of unity together.”

The Dean of Lichfield, the Very Rev’d Adrian Dorber, said: “This moment will represent years of patient dialogue and conversation. More importantly it marks the growing relationships between all God’s people and especially with our Catholic brothers and sisters in the Archdiocese of Birmingham.

“We pray that this gift of friendship will be a sign and example that heals historic divides and moves forward in shared faith. After all, Chad was bishop of an undivided church. He is perhaps a fitting patron of the unity we all seek. We know St Chad was a humble, godly man who, during his short tenure, helped to unite two warring peoples, bring hope and healing to the region, and unite it, and thus, inspired the construction of Lichfield Cathedral with his shrine at the East End. As a relic of St Chad is so generously translated back to Lichfield, a part of the cathedral’s heart is restored, and St Chad’s ministry of healing continues through the ages.”

Walking the way of St Chad from the well at St Chad’s Parish Church, Lichfield by Stowe Pool, the relic will make its way to Lichfield Cathedral where it will be gratefully received and housed in a purpose-built shrine. At the front of the Lady Chapel will be the new Shrine of St Chad, an altar-shrine with a golden corona of light suspended from the ceiling.

Alongside the shrine, specially commissioned icons on the walls will depict the story of Jesus’ ministry and golden vesicas – pointed oval shaped containers often used in mediaeval religious art – will house the gospels and holy sacrament.

“Reinstating the Shrine of St Chad serves to focus our attention on the life of St Chad, a man who lived by the example of Jesus Christ and in so doing, we are pointing to the faith we hold in Jesus, the one we share with our brothers and sisters around the world. We pray that the shrine will serve to bring people’s prayers and thoughts to Jesus as they encounter the wonder of this sacred space and the holiness that feels so tangible here at the Cathedral”, said the Dean.

As a sign of reconciliation and healing two fruit trees, symbolising two divided factions of the Church, will be planted in the Cathedral grounds and the 300 churches, schools and institutions attending the service will be gifted with a special Verdun Oak sapling, grown from the Verdun Oak in the Remembrance Garden in Lichfield.

Bishop of Lichfield Michael Ipgrave, said: “This is an enormously significant event for both our cathedral and the church across the wider Midlands for whom St Chad was apostle. The installation of the new shrine and relic of St Chad will be a sign of both healing and forgiveness. St Chad was a saint of the undivided church and this celebration is a potent symbol and step towards the unity that we pray and strive for as brothers and sisters in Christ. It also sends a powerful message of hope and reconciliation to our divided world.”