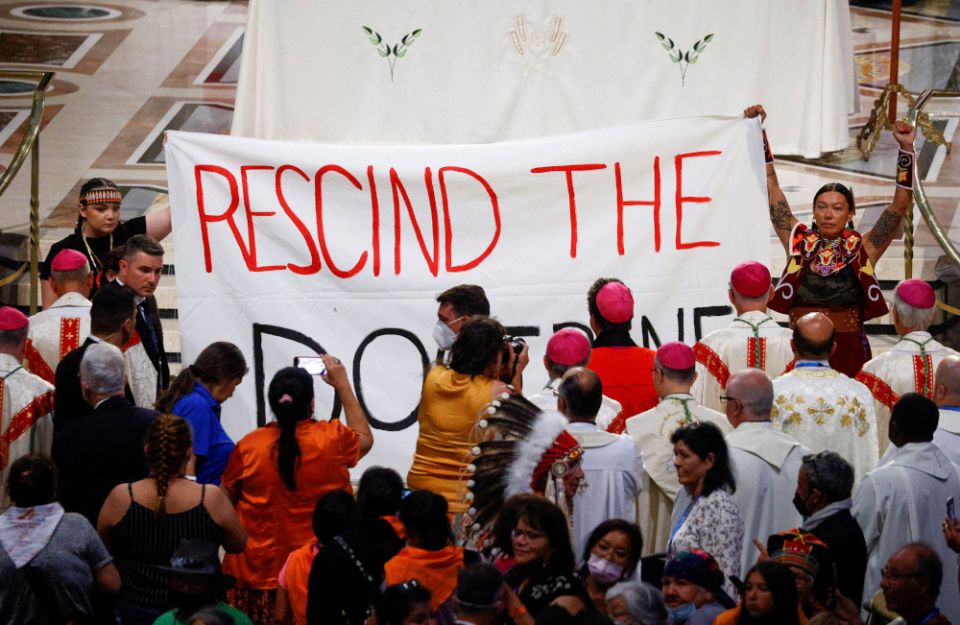 Indigenous people hold a banner calling on Pope Francis to 'rescind the doctrine,' an apparent reference to the so-called Doctrine of Discovery, a collection of old papal teachings that encouraged explorers to colonize and claim the lands of any people who were not Christian, placing both the land and the people under the sovereignty of European Christian rulers. The incident occurred during a papal Mass at the National Shrine of Sainte-Anne-de-Beaupré in Quebec. Credit: CNS/Guglielmo Mangiapane, Reuters ~ July 28, 2022

The loss of the land, language, culture and spirituality of the Indigenous peoples of Canada and the foundation of the residential school system all can be traced to the doctrine, Indigenous leaders told reporters after their meetings with the pope.

Asked July 20 if the pope was expected to say something about the “Doctrine of Discovery” while in Canada July 24-29, Matteo Bruni, director of the Vatican press office, said, “a reflection is underway in the Holy See on the Doctrine of Discovery,” and the study is nearing its conclusion. However, he said he was not certain that a statement would be completed before the papal trip ends or if the pope would speak about it while in Canada.

Sarain Fox, an activist and member of the Batchewana First Nation near Sault Ste. Marie, Ontario, told Canada’s CBC News that she was one of the people holding the banner as Mass began in the National Shrine of Sainte-Anne-de-Beaupré.

“It’s important for us to be recognized as human beings, so it’s not enough just to apologize. You need to talk about the root of everything,” which is the Doctrine of Discovery, Fox told CBC News.

The Canadian Conference of Catholic Bishops, in a 2016 statement on the Doctrine of Discovery, acknowledged the connection between it and the government’s residential school policy, which forcibly removed Indigenous children from their homes and sent them to schools where their language, cultures and spiritualities were suppressed.

“The attitudes and policies which deprived Indigenous people of their way of living on the land were closely related to those which assumed that it was good and appropriate to remove Indigenous children from their families and their own cultural system of education and place them in residential schools,” the Canadian bishops said.

“We are mindful that Catholics were complicit in these systems,” the bishops continued in the 2016 statement. “While many of the priests, brothers, sisters and laypeople who worked in the residential schools served with generosity, faithfulness and care, the deeply flawed policies behind the schools, and the abusive actions of some of the personnel among them, left a legacy of suffering.”

The office of Canadian Prime Minister Justin Trudeau said July 28 that the need to rescind the Doctrine of Discovery was one of the issues he discussed in separate private meetings the previous day with Francis and with Cardinal Pietro Parolin, Vatican secretary of state.

The 1493 papal bull “Inter Caetera,” issued by Pope Alexander VI, often is identified as the origin of the Doctrine of Discovery, noted an article published in March in the Toronto-based Catholic Register. It divided the Americas between Spain and Portugal, giving explorers the right to claim lands not inhabited by Christians for their Christian kings and queens.

There may have been people living there, the article said, but if they weren’t Christians the land was considered terra nullius — empty land belonging to no one.

The Canadian bishops noted that even if Alexander’s words could have been read as denying the rights of the Indigenous people in the “newly discovered” lands of the Americas, less than 50 years later Pope Paul III repudiated that position.

In a papal brief titled “Pastorale Officium,” Paul threatened with excommunication anyone who enslaved the Indigenous people of the Americas or stole their land.

Meeting Indigenous Canadians at Fort Simpson in 1987, Pope St. John Paul II said the Catholic Church upholds the “equal human dignity of all peoples,” and he insisted Paul’s position against the right to enslave the Indigenous “has always been the church’s position.”

As Francis prepared to visit Canada, the Jesuit journal La Civiltà Cattolica — a journal reviewed before publication by the Vatican Secretariat of State — also touched on the issue.

“The position of the Catholic Church has long been radically critical of all forms of colonialism. In her magisterium we find ancient and authoritative attestations affirming the dignity of Indigenous peoples, beginning with the famous ones of Paul III,” said the article by Jesuit Fr. Federico Lombardi, the former papal spokesman.

“It cannot be denied, however, that there had previously been statements” that were “used to justify the appropriation of lands, in particular by ‘Catholic’ powers, in the light of the intertwining interests of evangelization and colonization,” he wrote.

Lombardi argued, however, that the mistreatment of the First Nation, Inuit and Métis communities of Canada, the expropriation of their traditional lands and the efforts to force their assimilation through the residential school system were not primarily the result of Catholic policies regarding evangelization and colonization.

Instead, he said, Canada’s policies regarding Indigenous people in the late 1800s flowed from the “culturally dominant” belief among the settlers that Indigenous cultures were inferior and destined for extinction, so assimilation was “the only realistic prospect of a future for them.”