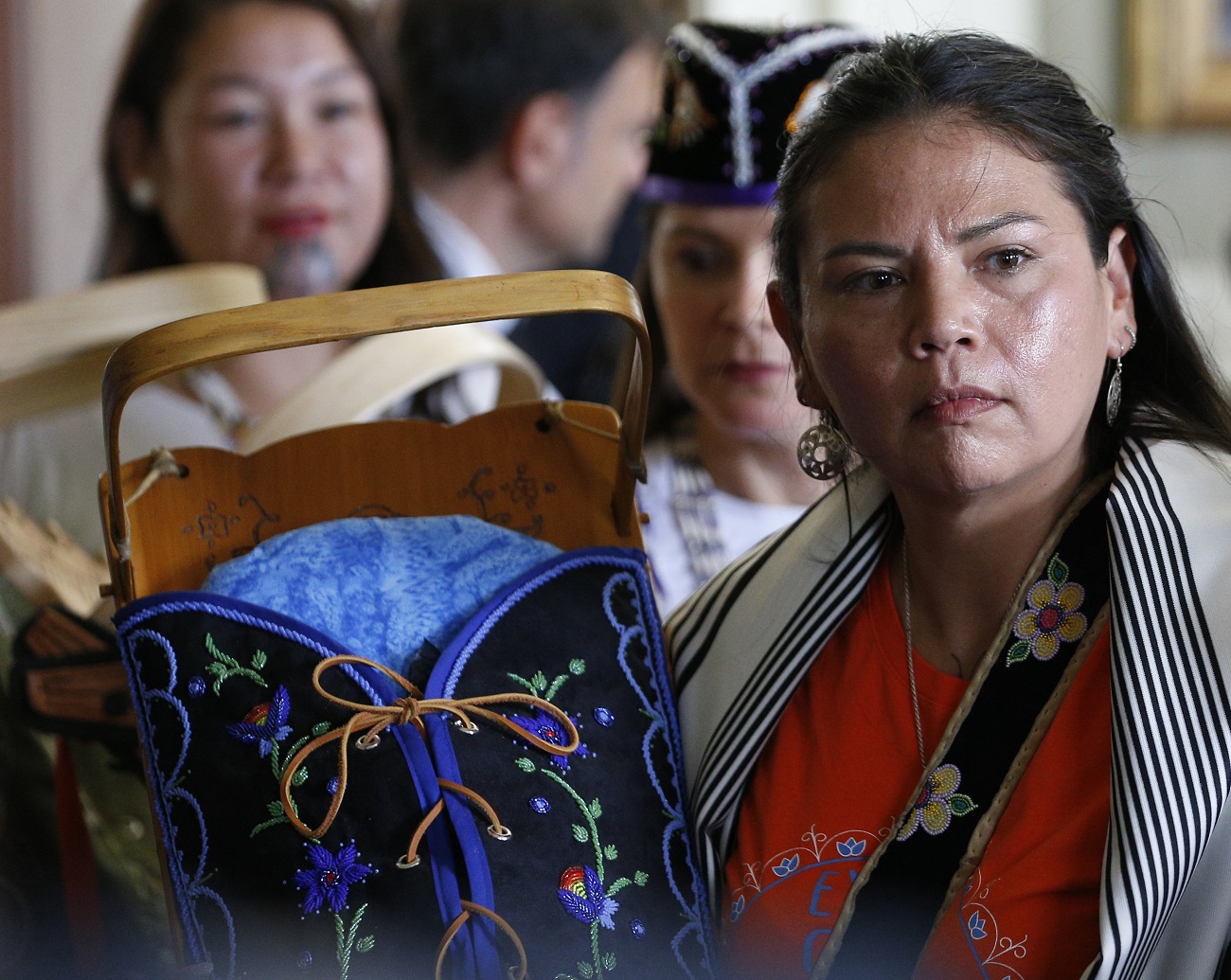 An Indigenous woman displays a cradleboard as Pope Francis meets with a delegation of Indigenous peoples in the archbishop's residence in Quebec City. Indigenous leaders want Pope Francis to help them get information about the more than 4,000 children who died at Canada's residential schools and the thousands of others who never returned home from the schools. Credit: CNS/Paul Haring ~ July 29, 2022

Meeting Indigenous survivors of residential schools in Canada, Pope Francis entrusted them and the journey of truth, healing and reconciliation to three women: St. Anne, Mary and St. Kateri Tekakwitha.

“These women can help us to come together and start to weave anew a reconciliation that can uphold the rights of the most vulnerable in our midst and look at history without resentment or forgetfulness,” the pope said July 29, his last morning in Canada.

Before heading to the airport for a three-hour flight to Iqaluit, Nunavut, in the Canadian Arctic, Pope Francis met with two dozen survivors of residential schools from across Eastern Canada. Organizers said they included people from the Algonquin, Mohawk, Cree, Innu and Mi’kmaq nations.

Seated in a wheelchair, Pope Francis greeted each of the survivors as they entered a large living room in the residence of Cardinal Gérald Lacroix of Quebec. He then entered the room using a walker.

Reporters and television cameras were present for the beginning of the meeting but were asked to leave after the formal speeches so the pope and survivors could speak to each other in private.

Pope Francis told the group that he had come to Canada “as a friend” to meet representatives of the First Nation, Inuit and Métis communities and “to see, hear, learn and appreciate how the Indigenous populations of this country live.”

“I have come as a brother, to discover firsthand the good and bad fruit borne by members of the local Catholic family in the course of the years,” he said. “I have come in a spirit of penance, to express my heartfelt pain at the wrong inflicted on you by not a few Catholics who supported oppressive and unjust policies in your regard.”

Pope Francis made similar apologies throughout his visit July 24-29; many Indigenous leaders, however, had hoped that the pope would apologize for the abuse they experienced as a result of the policies of Catholic Church as an institution and not just as the sins of certain of its members.

“I have come as a pilgrim, despite my physical limitations, to take further steps forward with you and for you,” the pope told the survivors.

The trip, he said, was meant to encourage progress in “the search for truth, so that the processes of healing and reconciliation may continue and so that seeds of hope can keep being sown for future generations — Indigenous and non-Indigenous alike — who desire to live together, in harmony, as brothers and sisters.”

Before and during the visit, Indigenous leaders had requested the pope’s help in getting the dioceses and religious orders that ran the government-owned schools to turn over all records they have of the schools. In particular, they are looking for information about the more than 4,000 children who died at the schools and the thousands of others who never returned home from the schools.

Saying he was moved by seeing so many Indigenous families who came to events with grandparents, children and grandchildren, Pope Francis entrusted “our pursuit of the path that lies ahead to the loving care of those who best understand how to protect the most important things in life.”

“I am thinking of women,” he said: St. Anne, the grandmother of Jesus; Mary, his mother; and St. Kateri, the daughter of a Mohawk father and Algonquin mother. Born in 1656 in what is now New York, she died in 1680 in what is now Quebec. Her tomb is at St. Francis Xavier Mission Catholic Church in Kahnawake, about 170 miles from Quebec City.

“These women can help us come together and start to weave anew a reconciliation that can uphold the rights of the most vulnerable in our midst and look at history without resentment or forgetfulness,” the pope said.

“Our Lady and St. Kateri,” he said, “received from God a plan for their lives, and, without asking any man, courageously assented to it.”

They could have “simply submitted to the patriarchal rules of the time and given up, without battling for the dreams that God himself had inspired in them,” the pope said. But “instead, with meekness and determination, with prophetic words and decisive gestures, they blazed a trail and accomplished what they had been called to do.”

Pope Francis prayed that they would “bless the journey we now share and intercede for us and for this great work of healing and reconciliation that is so pleasing to God.”