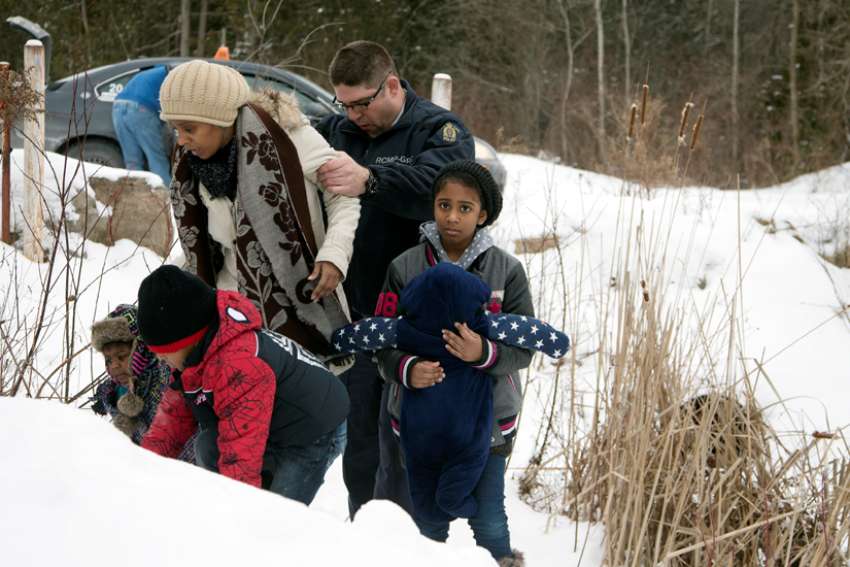 A woman who told police that she and her family were from Sudan is taken into custody by a Royal Canadian Mounted Police officer after arriving Feb.12 by taxi and walking across the U.S.-Canada border into Quebec. Credit: CNS/Christinne Muschi, Reuters ~ Feb. 12, 2021
Michael Swan, The Catholic Register

The Canadian Council of Churches, Amnesty International and the Canadian Council for Refugees are headed to the Supreme Court of Canada on behalf of refugee families who want a legal way to apply for asylum at Canada’s land borders.

After twice winning in Federal Court only to see those decisions reversed in the Federal Court of Appeal, this is the first time the Supreme Court has agreed to hear arguments about the constitutional validity of Canada’s Safe Third Country Agreement (STCA) with the United States.

Under the agreement, persons seeking refugee status must make their claim in the first country in which they arrive. It has been in place since 2004.

“Most refugees’ first experience of Canada is either to be summarily denied protection and excluded if they go to a (legal) port of entry without an exception to the STCA or to be forced to be ‘law breakers’ and arrested and processed upon entry at Roxham Road,” said Vernon, who runs Detroit Mercy’s immigration law clinic and regularly takes students to Roxham Road for real life experience of practising law on the border. “This is not in keeping with Canada’s international obligations, with constitutional rights of people on Canadian soil, nor with the dignity due to human beings — particularly human beings in distress.”

The latest court loss for the refugee advocates at the CCC, AI and CCR came in April. The appeal court’s decision was based “not on substantive grounds, but on the basis of how the arguments were framed,” said a press release from the Canadian Council for Refugees.

The appeal court faulted the July 2020 Federal Court decision that the STCA was unconstitutional because safeguards against arbitrary and hasty decisions by Canada Border Services Agency agents were not practically available and because the U.S. inland refugee determination system was dysfunctional and failed to meet the minimum standards of the United Nations Convention on Refugees.

“Broad, system-wide inferences concerning the United States from the limited nature of the individual incidents described in the record cannot be made,” Justice David Stratas wrote on behalf of the unanimous three-judge panel.

But Vernon argues that the STCA has created the mother of all catch-22s for asylum seekers, who often have no choice but to come to Canada through the U.S. It’s “a system where most refugees are required to have secret knowledge of a tolerated irregular pathway into Canada (Roxham Road). If they don’t have that knowledge and go by what most people would think is ‘the right way’ to an (official) port of entry, they are categorically denied access to Canada’s refugee protection system, no matter the merits of their case.”

For many refugees the only way to legally access Canada’s asylum system is to get arrested at an unofficial border crossing, ask for asylum and go through a pre-removal risk assessment.

Since COVID, the situation has gotten worse, Vernon said.

“The Trudeau government, against the advice of its own public health officials, used the coronavirus pandemic as a pretext to reject refugees at the irregular points of entry,” he said. “(This) shows how precarious the rights of refugees are under the Safe Third Country Agreement, even under a government that seeks to portray itself as a champion of refugees. One can only imagine what could happen under a government with a different outlook.”

For the appellants headed to the Supreme Court, the real issue is the American record of incarcerating almost all asylum seekers, rushing them through immigration courts without adequate representation and often sending them back to their countries of origin without a hearing.

“The evidence is overwhelming that the U.S. is unsafe for many refugees,” the CCR said in its release.

The three organizations are calling on Ottawa to suspend the STCA until the Supreme Court rules.

“Withdrawing from the agreement would not only ensure that Canada meets its Charter and legal obligations, but would also allow people to present themselves in an orderly way at ports of entry, ending the need for irregular crossings,” said the CCR.