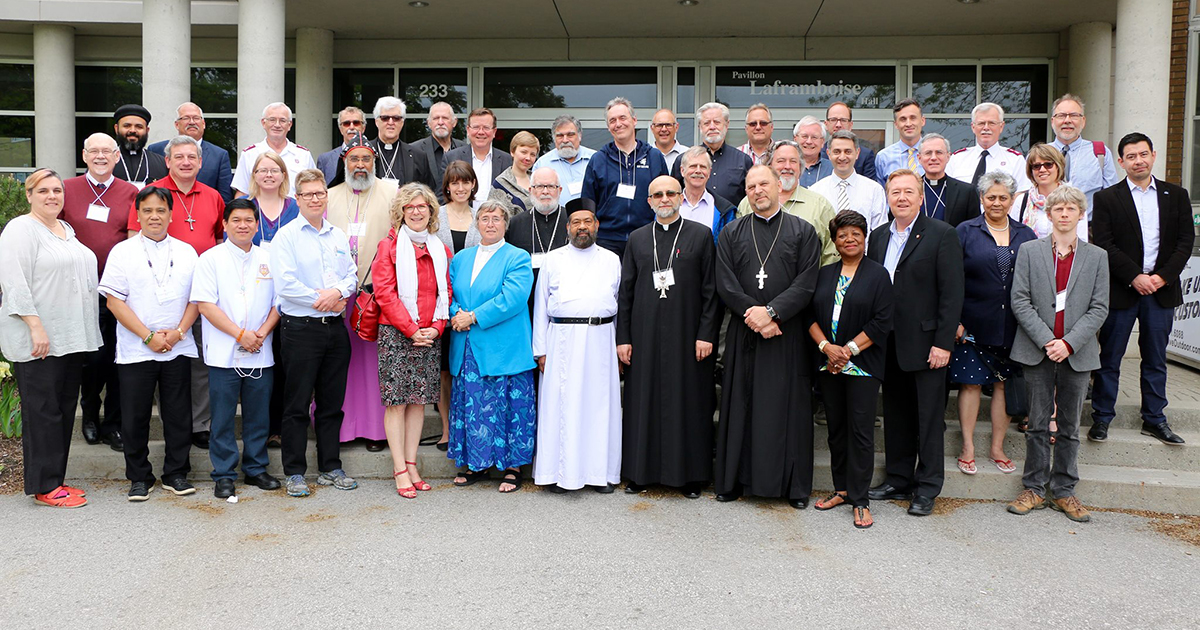 Members of the Canadian Council of Churches Governing Board attend a meeting in Ottawa at Saint Paul University in May 2017. Photo by Kaeli Sweigard
By Matt Gardner, Anglican.ca

As one of the founding members of the Canadian Council of Churches (CCC), the Anglican Church of Canada has long played a major role in the country’s leading ecumenical council.

Ecumenism “is in the Anglican DNA”, according to Bishop Michael Oulton—one of the two current appointed Anglican representatives on the CCC governing board, along with Canon Mary Conliffe.

“I think that’s the heart of who we are as a church … I’m a huge believer in the importance of partnerships and building expanded partnerships wherever possible, and the Canadian Council of Churches is, I think, a critical part of that for us,” Oulton said.

“It’s always been part of who we are as Anglicans to try to find a common table around which to sit.”

Bishop Oulton and Canon Conliffe are currently nearing the end of their three-year terms as representatives to the CCC, which will conclude at the council’s next meeting in May. Although she does not represent the Anglican Church of Canada in her role, current CCC president, the Rev. Canon Dr. Alyson Barnett-Cowan, is also an Anglican.

Through their strong presence on the council from its inception, Anglicans have worked with other Christian denominations to promote mutual understanding and stand at the forefront of activism in the cause of justice and peace.

History of Anglican involvement in the CCC

The Canadian Council of Churches was founded in 1944 by 10 Christian churches, including the Anglican Church of Canada. At that time, professed members of the founding churches represented more than 45 per cent of Canada’s population.

Since that time, the council has continued to expand its roster of denominations, growing ever more diverse. As of May 2018, the CCC will have 26 member churches, up from its current 25. That figure includes a sizable number of evangelical churches, as well as churches with historical origins outside of Europe such as the Mar Thoma Syrian Church, the Ethiopian Orthodox Tewahedo Church of Canada, and the Armenian Holy Apostolic Church, Canadian Diocese.

Anglicans have played a prominent role in the CCC throughout its history. The first two presidents of the CCC, L.W.B. Broughall and Derwyn Owen, were Anglicans. Multiple former Primates have filled that position, including Owen, Walter Barfoot, and Edward Scott.

Many of the council’s general secretaries have also been Anglicans, with individuals such as Donald Anderson, Stuart Brown, and David Oliver having served in the role—often for lengthy tenures.

“I think we recognize—maybe coming from a history of being the state church—that there’s a real role for the Christian religion to play in speaking to society, and presenting a vision of God’s reign into the Canadian context,” Conliffe said. “And I think Anglicans, because we are ourselves a very broad church with a wide range of expression, can really witness to the rest of Christendom what it means to be inclusive, what it means to hold all brothers and sisters in a unity together.

“I think Anglicans recognize the value in working together, because historically we’ve been the via media [a Latin term meaning “the middle road”]. We have accessibility to other denominations who find in us something recognizable of themselves. So we have a broad appeal, if you want to put it that way, from Catholics to Orthodox to Protestants, because we encompass some of those traditions ourselves.”

Embodying that inclusive spirit, both of the present Anglican representatives to the CCC had ample ecumenical experience before being approached by then-coordinator of ecumenical and interfaith relations Bruce Myers to serve on the council.

Currently diocesan executive assistant to Archbishop Colin Johnson, Conliffe has worked for the Diocese of Toronto since 1999, having attained her master of divinity degree from Trinity College the previous year. Her longstanding interest in ecumenism was reflected in her M. Div thesis, a comparative study of Eucharistic prayers in various denominations that used the Lima Liturgy as a template.

Conliffe subsequently served a three-year term on the Joint Anglican-Lutheran Commission, which brought her to the attention of Myers as a candidate for the CCC Governing Board. As an Anglican representative on the board, she has continued to work with fellow board members to promote understanding of different traditions.

“When you look at our governing board meetings, usually at least a quarter of the time is spent learning from each other, and that’s really valuable time,” Conliffe said.

“I actually think that might be my favourite part of the governing board meetings—learning from each tradition and why they emphasize what they do. I think all of us emphasize different parts of expressing the faith, and I find not only what [different denominations] do, but why they do it, really interesting.”

For his part, Oulton in his time as bishop of the Diocese of Ontario had served on the United Church-Anglican Dialogue and as a representative to the Canadian Conference of Catholic Bishops. Yet his own personal experience of ecumenism stretches back much further.

During his time with the Canadian Conference of Catholic Bishops, Oulton was reading a list of Roman Catholic representatives when he saw the name of one Archbishop Daniel Bohan. Inquiring whether the archbishop had ever ministered in New Brunswick, Oulton learned that Bohan in the mid-1970s had served as a parish priest in his hometown of Port Elgin, New Brunswick. The two soon reintroduced themselves to each other.

“He was a luminous figure in my hometown, and we’d always stop at the parish house and the door was always open to us,” Oulton recalled.

“It didn’t matter who we were, what denomination we were, it was always open to us and he was involved in a lot of things in our community … Part of the reason why I grappled with a sense of call to ministry was the presence of him in the life of my community and in my life … It was so neat to reconnect decades later.”

Sadly, Archbishop Bohan was later diagnosed with cancer and died in early 2016. But his early work as a parish priest left a lasting impression on Bishop Oulton.

Later on, during his own ministry as an incumbent in Alberton, P.E.I., Oulton took part in ecumenical projects such as the construction of the W.J. Phillips Residence, a seniors’ residential care facility whose development was a collaborative effort between five different churches.

“It was the churches that drove that [project], and again from that ecumenical basis,” Oulton said. “It’s always been a part of my life, as a young child, all through my ministry, and it was just such a privilege to be able to serve a term on the Canadian Council of Churches and see that work up close.”