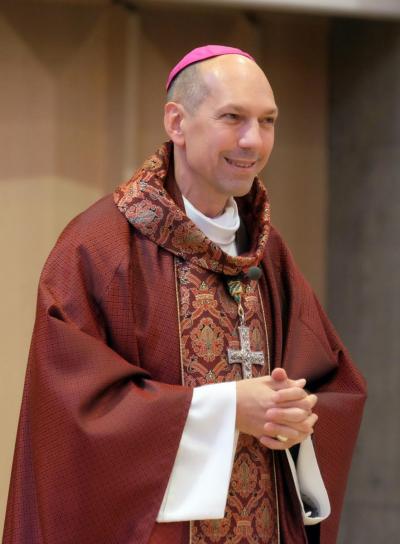 Bishop Don Bolen of the Roman Catholic Diocese of Saskatoon is seen here at a confirmation. Credit: Tim Yaworski ~ 2015

Speaking of his new appointment, Archbishop Bolen, who was ordained a priest in Regina and served as archdiocesan vicar general and chair of the archdiocesan ecumenical commission, said: “To be moved from the Diocese of Saskatoon is painful, because it has been such a grace-filled experience to live and to serve here as bishop, but, at the same time, to move to the Archdiocese of Regina is to go home. I am profoundly grateful to remain in my home province.”

Archbishop Bolen was born in 1961 in Gravelbourg, Saskatchewan, and raised on a nearby farm. He was ordained a priest in 1991 in Regina and served at a number of parishes in the archdiocese over the years, as well as being on the department of religious studies faculty at Campion College.

He was named bishop of Saskatoon in December 2009 and was consecrated bishop the following March.

His time as bishop has included a multitude of diocesan initiatives and projects.

In June, he spent 36 hours living on the streets to raise funds for Sanctum Care Group, which provides hospice and transitional care for homeless people and individuals struggling with HIV.

He began work in the diocese just as construction was beginning on a new cathedral and Catholic pastoral center, after years of planning and fundraising. The new Cathedral of the Holy Family and pastoral center have become a hub of ministry and outreach.

“When we opened the cathedral we expressed the hope that it would be a place of welcome, but also a place of healing and reconciliation – and I think it has become just that,” he said.

Archbishop Bolen pointed to a memorial at the cathedral earlier this year “that brought 2,400 students together for an event that directly addressed the horrors of the Holocaust and took steps of reconciliation between Christians and Jews.” He also cited the recent installation of a treaty plaque at the cathedral, “demonstrating how important it is that we walk together with indigenous peoples, genuinely and humbly seeking reconciliation and healing.”

Archbishop Bolen will continue to serve as apostolic administrator in Saskatoon until his installation as archbishop of Regina this fall; the exact date has not yet been set.