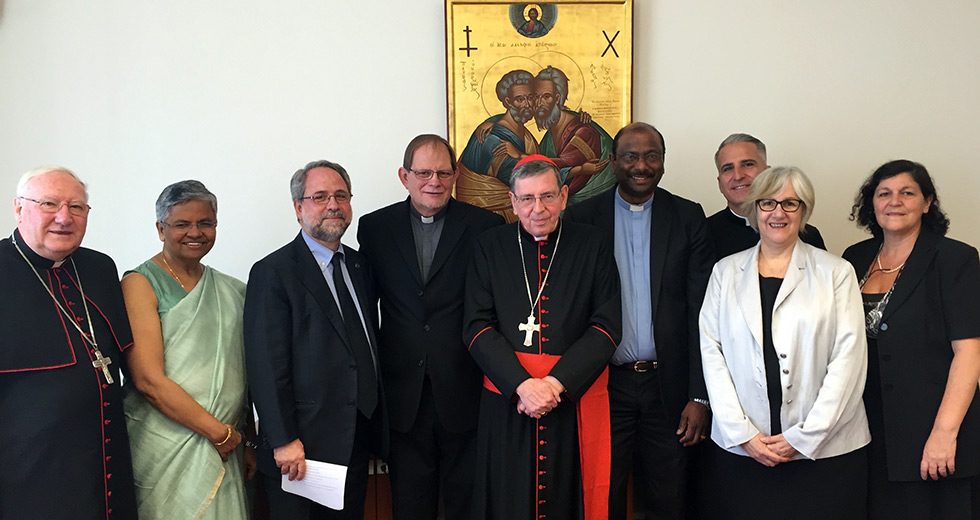 In his official address to Pope Francis, Ferguson stated that it was with a sense of both “joy and urgency” that these meetings were taking place. “Our joy comes from knowing that through repentance and dialogue we are growing closer to the unity that is Christ’s gift to the church, so that all may believe,” he said, noting the progress made through official dialogues and the process of associating with the Joint Declaration on the Doctrine of Justification (JDDJ).

“Together we celebrate your reaching out to the Waldensian Church and all other signs on both our parts to overcome divisions through repentance and respectful dialogue,” Ferguson added. “We come today to wholeheartedly reconfirm that ecumenical vision and our commitment to visible unity and Christian witness.”

“And now comes the urgency!” Ferguson continued. “Sent in the Spirit of God’s love, mercy and compassion we cannot hesitate but must move decisively forward together in the face of the perils and suffering confronting this world and all her people.” He drew parallels between the commitments of both the WCRC and the Roman Catholic Church to social justice, citing the Accra Confession and Laudato Si’.

“Our faith in Jesus impels us to live charity through concrete gestures capable of affecting our way of life, our relationships and the world around us,” said Pope Francis, in his prepared remarks to the WCRC delegation. “…[T]here are many areas in which Reformed and Catholics can work together in bearing witness to God’s merciful love, which is the true remedy for the confusion and indifference that seem to surround us.”

“There is urgent need for an ecumenism that, along with theological dialogue aimed at settling traditional doctrinal disagreements between Christians, can promote a shared mission of evangelization and service,” said Pope Francis.

“We need to have theological discussions,” agreed Jerry Pillay, WCRC president, “but we also need to talk about our service and witness in the world. I think it’s because of that common vision that we are able to link and connect more tightly to work together.”

The WCRC has held a series of formal dialogues with the PCPCU, the fourth of which is finishing its work with a report—Justification and Sacramentality: The Christian Community as an Agent for Justice—which will be released in the coming year.

Once the report is finished it can be used “in our churches to foster a spirit that will be open to a more concrete collaboration—in the sense that when we talk about justice and action we have to consider the relationship between the universal and the local, which becomes the place where these practical applications can actually take on flesh,” said Bishop Brian Farrell, PCPCU secretary.

“There’s a sense of hope that this fourth phase provoked some ways forward and asked some questions for the future,” said Aruna Gnanadason, WCRC consultant for theology. “It emphasized that our discussion could be about more visible unity rather than just doctrinal issues, what we together move more into practical engagement. We are looking forward to deciding on next steps.”

“Your association to the JDDJ is very important also for us,” said Cardinal Kurt Koch, PCPCU president. “These are very important questions also for our dialogues in the future. We have many questions to deepen in further dialogue and how we can seek common witness.”

“We see 2017 as a fantastic opportunity to be able to say here is a sign of visible unity and agreement that we can move forward and work together,” said Pillay. “We understand the Reformation with its great sense of diversity, it’s multiplicity of events—Luther, Calvin, Zwingli, Knox—and unity becomes a significant part of that.” 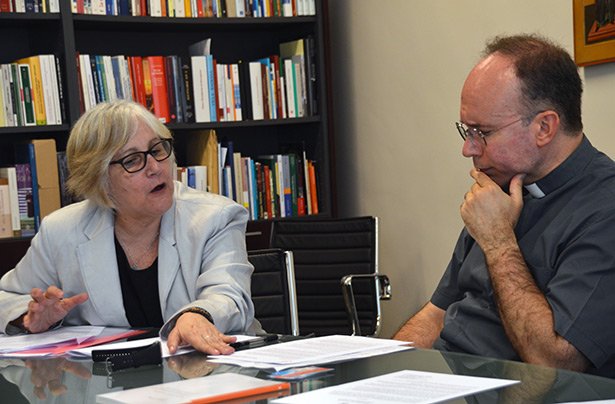 Rev. Dora Arce Valentin, WCRC executive secretary for justice meeting with an official of the PCJP

The meeting with the PCJP focused on areas of possible convergence on issues of common interest, as both sides introduced themselves to each other. The wide-ranging discussion included topics such as the “economy of life,” “virtuous entrepreneurship,” and other ways in which theologically-based development could ensure the just inclusion of all and the stewardship of God’s creation—with many comparisons drawn between the Accra Confession and Laudato Si’.

“There are many potential spaces for us to work together—practically, systematically and theologically,” said Dora Arce Valentin, WCRC executive secretary for justice and partnership. “We trust that today’s opportunity to understand each other better in areas of justice and peace build common paths to respond prophetically to our common call to be witnesses of Jesus Christ, building his Kingdom here and now in this world that God loves so much.”