— January 21, 201621 janvier 2016
Bishop Kenneth Kearon of the Dioceses of Limerick and Killaloe in the Church of Ireland gave a lecture January 21, 2016 entitled 'On Building an Ecumenical Barn'
By Kiply Lukan Yaworski, Prairie Messenger

Anglican Bishop Kenneth Kearon used the image of constructing a barn to reflect upon the ecumenical movement during this year’s De Margerie Series on Christian Reconciliation and Unity, held in conjunction with the Week of Prayer for Christian Unity in Saskatoon.

In addition to a public lecture “On Building an Ecumenical Barn,” held at St. Thomas More College Jan. 21, the 2016 De Margerie series also included two workshops – one for clergy and ministry leaders Jan. 22, and another on Jan. 23 for the general public, entitled “Being Church in the World Today.”

Dr. Terry Downey, president of St. Thomas More College opened the public lecture at STM with words of welcome. Held in conjunction with the Week of Prayer for Christian Unity, the De Margerie series is jointly sponsored by STM, the Prairie Centre for Ecumenism, and the Roman Catholic Diocese of Saskatoon. This year’s lecture was available for the first time on live-streamed video (and is now posted on the diocese’s YouTube channel).

Nicholas Jesson, ecumenical officer for the Roman Catholic Diocese of Saskatoon, noted that the De Margerie series is named for local ecumenical pioneer, Rev. Bernard de Margerie, one of the founders of the Prairie Centre for Ecumenism in Saskatoon and its first director. De Margerie is also the author of In God’s Reconciling Grace, a book of prayers about Christian unity, reflecting his conviction that prayer and conversion must be at the heart of the ecumenical movement.

Bishop Donald Bolen of the Roman Catholic Diocese of Saskatoon introduced Bishop Kenneth Kearon, who was named the Anglican bishop of Limerick and Killaloe in Ireland one year ago. Previously Kearon served as director of the Irish School of Ecumenics at Trinity College in Dublin and as Secretary General of the Anglican Communion, during a period of reflection and some tension in global Anglicanism about the nature of communion and interdependence. 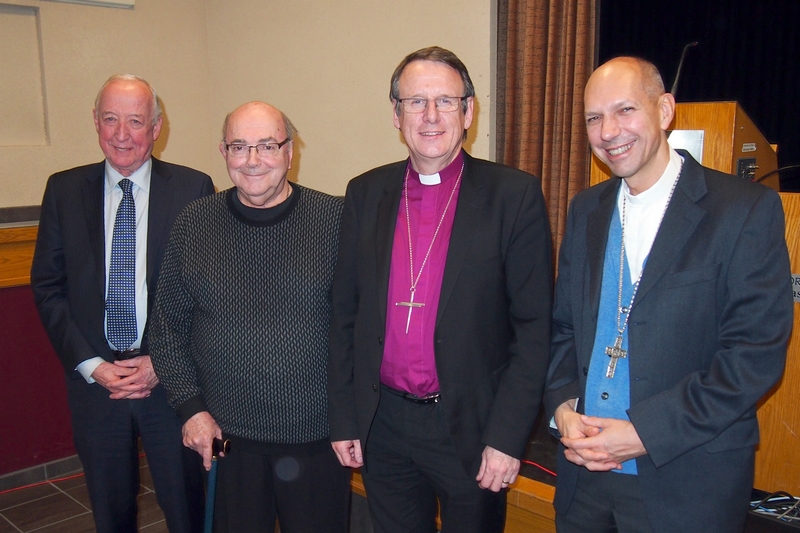 During his time with the Anglican Communion Office, Kearon met and worked with then-Monsignor Donald Bolen who was on staff with the Pontifical Council for Promoting Christian Unity in Rome, and focusing on Anglican-Roman Catholic and Methodist-Roman Catholic relations.

“It was great to be a colleague of Kenneth during those years – trying years, but adventurous years,” said Bolen. He also noted another connection: Bolen and Kearon wear identical Second Vatican Council episcopal rings.

Kearon expressed appreciation for Bolen’s gifts of friendship and hospitality, saying “that was what rooted our relationship in that difficult time,” and adding that the ecumenical dialogue is not merely a formal process, but is rooted in relationship.

Kearon wove together his own life experiences with the larger picture of striving for Christian unity in his lecture entitled “On Building an Ecumenical Barn,” in which he compared the ecumenical movement to a structure that is in use even as it is still being built, with different levels of renovation, repair, construction, occupancy and use – all happening at the same time.

This barn in which the community of faith inhabits “was started in the first century AD and expanded over the centuries as numbers grew, and it was embellished as necessary by creeds and ecumenical councils,” he related.

“The first major damage to that barn occurred about 1000 years in the division between East and West, and there was even further, major damage in the 16th and 17th centuries, in the period we call the Reformation. Since then, different groupings have continued to live in their separate damaged sections of the barn, with little contact with others until the early part of the 20th century, when first a limited number of communities began to discuss the concept of repairing the barn. And some other communities joined in at later stages, until formally, most of the communities living in the various parts of the disjointed and damaged barn are now working together on the work of restoration.”

He continued: “At the start, work had to begin on the basic structural beams which were broken in the original damage. These beams are the main theological issues which failed to hold the church together in times of challenge and crisis, and these major beams have been the subject matter of the various bi-lateral and multi-lateral dialogues of recent years.”

Kearon noted that this analogy helps him to understand recent positive interest in Evangelical and Pentecostal circles about the ecumenical movement. “It’s as though they are saying, ‘hey, wait a minute, what’s going on? No one asked us, and actually when you do ask us, we’re not sure that we really like the design you’ve been working on. It doesn’t suit us.”

Throughout his address, Kearon identified ecumenical phases through history and in his own life – first as Director of the Irish School of Ecumenics, then as Secretary General of the Anglican Communion, and now as a Church of Ireland bishop in the west of Ireland.

He described how the Irish School of Ecumenics originally sought to serve the churches by being a critical friend, “studying the flaws and weaknesses of the churches, which kept the churches apart.”

By the time Kearon became director, the school had developed a more nuanced vision, he said. “The ecumenical movement exists in order that the world may believe, and making the churches one is a step on that path,” he said. “The gospel of reconciliation means the breaking down of all divisions wherever they occur –divisions of gender, of race, of politics, of economic inequality, and so on.”

He stressed: “Churches cannot preach this message of reconciliation in a divided world if they themselves are divided. That is why ecumenism is central.”

Kearon described being appointed to the Anglican Communion office in 2005, just before the Windsor Report was published, at a difficult time for Anglicanism.

“The issue of same sex relationships had been on the agenda of the Anglican Communion since 1978, but was not being addressed. During the 1990s it became a major social issue in many western countries, and negative reactions to such engagement became more vocal in other countries, especially, but not exclusively, in Africa,” he said. “This was reflected in our churches in these countries, and this came to a head at the Lambeth Conference of 1998, where a resolution restating traditional values on marriage was passed. The status of that resolution has been contested. In 2002 and 2003 the diocese of New Westminster in Canada authorized public rites of same sex blessing and in the United States the diocese of New Hampshire selected Gene Robinson as bishop – a person in a same-sex relationship.”

The Windsor Report was commissioned after those events – “not to address the question of same-sex relationships, but to examine ways in which the unity of the communion could be maintained in situations of division,” Kearon explained.

This internal Anglican division also had an effect on ecumenical relationships with other denominations, he noted. “However the ecumenical conversation themselves were also at a point of change.”

Ecumenical “agreed texts” on matters that had divided Christians for centuries have transformed inter-Church relations, he said.

Ecumenical dialogue begin with conversations about doctrinal issues, but a second phase is to begin asking at the same time “what’s the purpose of all this dialogue, do we have a vision of what the end result would look like, and why can’t we just get on with it?” he said.

Kearon suggested the next phase may include considering the internal question of how the emerging, ecumenical-oriented Church relates to that part of the Church which is not ecumenically committed. There is also an external question of “how the emerging, ecumenically oriented church sits with the rest of the whole created order, including humanity.” This includes matters related to the environment, as well as the economic and political order, secularism, interfaith questions, and “questions posed by fundamentalisms, both religious and political,” he listed.

Kearon observed that in his experience as a bishop in rural Ireland, ecumenism is now a dimension of community life, and not primarily of church life. The driving force seems to come from the laity, rather than from church leadership.

“Seldom does an ecumenical event have its origins in decisions by clergy,” he noted. “The ecumenical initiative and the faith dimension of a community event is being devised by lay people.”

As for the ecumenical barn – the conscious decision to reconstruct the battered structure continues, said Kearon. “The craftsmen in wood are busy. We call them theologians or ecumenists, and they are continuing their vital work in rebuilding the structures and replacing the roof and their work is no where near finished. But they need to be reminded that rebuilding the roof is only the first step, not the be all and end all of their work.

“Those who are standing around, long ago became impatient with the slow progress, and they’ve begun to occupy and move into the building and to use it, probably to the annoyance of the roof builders.

“Meanwhile another huge mob has arrived on the scene, who never even knew of the existence of the barn, but think it’s a great idea, but they’d like to change it a bit to suit their own needs. We call them Evangelicals or Pentecostals. The roof builders’ patience is being tried but they haven’t given up. And meanwhile, another crowd has gathered – some from inside the barn, and others from we don’t know where – who say they find barns claustrophobic, and they want to live in the open air, they have no need for a barn at all, and they are taking flimsy pieces of plastic from the builders and creating ugly, shapeless shelters all across the grounds.

“The roof builders are angry and furious, and as a punishment for the roof builders’ bad humour, they are ordered to get off the roof and come down to where everyone else is, and worse than that, they are appointed as overseers of the whole unruly mob. In other words: they are made bishops.”