Bishop Denis J. Madden, auxiliary bishop for the Archdiocese of Baltimore and ELCA Presiding Bishop Elizabeth A. Eaton hold copies of “Declaration on the Way: Church, Ministry and Eucharist” – a unique ecumenical document that makes visible a pathway to Christian unity between Catholics and Lutherans
From USCCB.org

“Five hundred years ago wars were fought over the very issues about which Lutherans and Roman Catholics have now achieved consensus,” said ELCA Presiding Bishop Elizabeth A. Eaton. “Church, ministry and Eucharist have been areas of disagreement and even separation between our two churches, and we still have work to do both theologically and pastorally as we examine the questions. The declaration is so exciting because it shows us 32 important points where already we can say there are not church-dividing issues between us, and it gives us both hope and direction for the future,” she said.

At the heart of the document are 32 “Statements of Agreement” where Lutherans and Catholics already have points of convergence on topics about church, ministry and Eucharist. These agreements signal that Catholics and Lutherans are indeed ‘on the way’ to full, visible unity. As 2017 approaches, the 500th anniversary of the Reformation, this witness to growing unity gives a powerful message to a world where conflict and division often seem to drown out more positive messages of hope and reconciliation The document also indicates differences still remaining between Lutherans and Catholics and indicates possible ways forward. 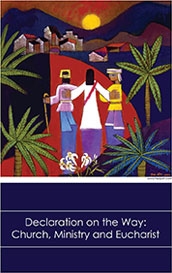 Declaration on the Way: Church, Ministry and Eucharist

In October both the ELCA Conference of Bishops—an advisory body of the church—and the Committee on Ecumenical and Interreligious Affairs of the U.S. Conference of Catholic Bishops (USCCB) received and unanimously affirmed the 32 Agreements. ELCA bishops requested that the ELCA Church Council accept them and forward the entire document to the 2016 ELCA Churchwide Assembly, the denomination’s highest legislative body.

The document seeks reception of the Statement of Agreements from The Lutheran World Federation (LWF) and the Vatican’s Pontifical Council for Promoting Christian Unity (PCPCU). The LWF is a global communion of 145 churches in 98 countries worldwide. The ELCA is the communion’s only member church from the United States.

The conclusion invites the PCPCU and the LWF to create a process and timetable for addressing the remaining issues. It also suggests that the expansion of opportunities for Lutherans and Catholics to receive Holy Communion together would be a sign of the agreements already reached. The Declaration also seeks a commitment to deeper connection at the local level for Catholics and Lutherans.

In December 2011, Cardinal Kurt Koch, president of the PCPCU, proposed a declaration to seal in agreements in the areas of the church, ministry and the Eucharist. The ELCA and the U.S. Conference of Catholic Bishops responded to the Cardinal’s proposal by identifying Catholic and Lutheran scholars and leaders to produce the declaration, drawing principally on the statements of international dialogue commissions sponsored by the LWF and the PCPCU and a range of regional dialogues, including those in the United States.

A significant outcome of the Lutheran-Catholic dialogue in the United States and internationally is the Joint Declaration on the Doctrine of Justification (JDDJ), signed in 1999 in Augsburg, Germany. With the JDDJ, the LWF and the Catholic Church agreed to a common understanding of the doctrine of justification and declared that certain 16th century condemnations of each other no longer apply.

What is this Declaration on the Way?

This is a unique ecumenical text that draws on 50 years of Lutheran-Catholic dialogue in preparation for the 500th Reformation anniversary coming in 2017. Major sources are dialogues at the global level. But, as happened in the formation of the 1999 Joint Declaration on the Doctrine of Justification, there’s mutual reinforcement between global and more local conversations, including those in the U.S.

What does the Declaration say?

The heart of the Declaration is the Statement of Agreements. On church, ministry and Eucharist, the Declaration draws together a litany of 32 consensus statements, where Catholics and Lutherans already have said there are not church-dividing differences between them. An elaboration of these agreements grounds them in the dialogues’ work. Finally, a more tentative section identifies some “remaining differences” – not intending to be comprehensive but suggesting some ways forward.

What does the Declaration hope to do?

By demonstrating how far Lutherans and Catholics have come together on three crucial topics, the Declaration indicates much ground that need not be retraced again, and it offers these Agreements to the churches to be received into their common life. In this way it helps inspire continuing work toward the visible Christian unity, which is Christ’s prayer.

Where does the Declaration stand now for our churches?

In October 2015 the Statement of Agreements was unanimously affirmed by the ELCA Conference of Bishops, which requested the Church Council also accept them and forward the Declaration to the 2016 ELCA Churchwide Assembly for reception. The text has been shared with The Lutheran World Federation.

Also in October, the 32 Agreements were unanimously affirmed by the Committee on Ecumenical and Interreligious Affairs of the U.S. Conference of Catholic Bishops, which commended the Declaration on the Way to Cardinal Kurt Koch, president of the Pontifical Council for Promoting Christian Unity, for further reflection and action.