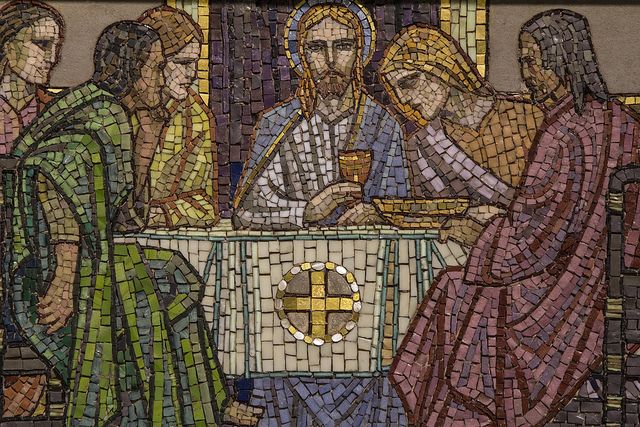 The Evangelical Lutheran Church in Canada's decision to allow authorized lay people to preside over the Eucharist in some circumstances has caused concern in some Anglican circles. Credit: Lawrence Lew, OP/Flickr
Archives

When the Anglican House of Bishops met in Niagara Falls, Ont., in mid-October, one of the first items on the agenda was the policy of authorized lay ministry adopted by the Evangelical Lutheran Church in Canada (ELCIC) during its National Convention this summer.

Sometimes called “lay presidency,” authorized lay ministry is a dispensation by which—in extraordinary circumstances—lay people can preside over services of the eucharist. While it can hardly be considered part of standard Lutheran practice, the convention voted in July to allow it in heavily circumscribed circumstances.

In an interview with the Anglican Journal, ELCIC National Bishop Susan Johnson said that the measures were brought in to meet a serious need.

“We find ourselves with occasional situations where it’s difficult and/or impossible to provide regular word and sacrament ministry,” she said, explaining that after considering a number of possibilities, including greater use of reserve sacraments and local ordination, authorized lay ministry was seen to be the “best compromise.”

While the Anglican Church of Canada is facing many of the same pressures (dwindling congregations, diminished financial resources, a shortage of priests) that led the ELCIC to adopt these measures, it does not see lay presidency as an option.

“For a lot of Anglicans, this is a no-go,” said Archbishop Fred Hiltz, primate of the Canadian church. “It’s just not in keeping with our understanding of sacrament and ordained ministry.”

Archbishop Greg Kerr-Wilson, metropolitan of the ecclesiastical province of Rupert’s Land, agreed, calling it a “non-starter” and saying it was a “departure from what we would see as the small ‘c’ catholic order of the church.”

It is an issue of special concern to Kerr-Wilson. If authorized lay ministry is practised anywhere, it will be in his jurisdiction—the geographically massive province of Rupert’s Land, which includes many remote communities and many Lutheran congregations.

He said he discourages Anglicans from participating in services where a lay person is presiding at the eucharist, and is in the process of drafting a pastoral letter addressing the issue, but he also stressed the importance of maintaining a good relationship with Lutherans. (The Anglican Church of Canada and the ELCIC have been in full communion since 2001.)

“What we want to do is make sure that first and foremost we are talking to the Lutheran bishops and the Lutheran churches about where we are at,” Kerr-Wilson said.

Hiltz discussed the matter of authorized lay ministry at the annual four-way meeting of Canadian and American Anglican and Evangelical Lutheran leaders in Washington, D.C., in September. As the Evangelical Lutheran Church in America (ELCA) had already adopted a similar policy, then-Presiding Bishop Katherine Jefferts Schori of The Episcopal Church (TEC) and Presiding Bishop Elizabeth Eaton of the ELCA were able to share their experiences of working through the issue.

“What we were hearing from Bishop Katherine was that notwithstanding Anglican angst over this, this issue has not been detrimental to the full communion relationship between TEC and the ELCA,” he said.

In many places across Canada, Anglicans and Lutherans work closely together. In Winnipeg, for example, the diocese of Rupert’s Land and the Manitoba-Northwestern Ontario Synod of the ELCIC work out of the same building, and across the country there are a more than 80 joint parishes and ministries.

But it is not in the places where there is robust co-operation between Anglicans and Lutherans that authorized lay ministry would likely be a problem.

“We’re not overly concerned about it, because…it really won’t affect us,” said Bishop Barbara Andrews of the Anglican Parishes of the Central Interior, where Anglicans and Lutherans in small communities are exploring ecumenical shared ministry. “We run our ecumenical shared ministries according to a handbook, and that would mean that we would always have a United Church, a Lutheran or an Anglican in the parish, and they must be from ordered ministry.”

Andrews noted that because the ELCIC’s policy lists a number of alternatives that must be sought first, including arrangements with Anglican churches, authorized lay ministry would conceivably be a problem only where there were Anglican and Lutheran congregations, neither of which had priests and did not have enough people to form an ecumenical shared ministry, and the Anglicans started receiving the sacrament from a Lutheran lay minister.

National Indigenous Bishop Mark MacDonald was also fairly sanguine about the issue. “I think it’s just one of the differences that we [Anglicans and Lutherans] have, and I don’t think that at that level it’s all that important,” he said. “The bigger question that I think gets missed is not who is the proper minister for communion, but how does a church authorize people for leadership?”

MacDonald pointed out that the issue of how to provide good, effective spiritual leaders in remote communities is an ongoing issue in the church and especially among Indigenous Anglicans, and it is not one that is likely to go away.

While the practical likelihood of authorized lay ministry impacting Anglican practice remains to be seen, it is a reminder that there are real differences between Anglican and Lutheran sacramental theology.

“It has exposed a few of our fundamental differences… in the way we look at the sacraments and even at ordained ministry,” said Bishop Donald Phillips of the diocese of Rupert’s Land. “[But] I don’t think those differences are serious enough to fracture the relationship.”

Hiltz echoed the same sentiment. “The nature of full communion is that this is not a merger; this is not the creation of one new church with a new, blended polity and ethos and all that,” he said. “It’s still about two autonomous churches that feel called by God to be a in a relationship with one another.”