“We’re suggesting this might be the more accurate, faithful and biblical way of thinking about what might be happening in the church today,” added commission member Canon Paul Jennings, who explained the report’s section dealing with models for same-sex marriage. “That is, it’s not a question of us redefining marriage in the abstract to be more inclusive and thereby imply, I don’t know what – that the previous understanding of marriage was wrong. But, it may be simply that God is calling same-sex couples into marriage and thereby broadening and enriching the institution without denying its previous meanings.”

Jennings added: “Maybe God is intending to graft gay Christians into the institution of Christian marriage, sharing its root meaning yet on somewhat different terms.”

This conception of same-sex marriage, the report said, would involve revising the canon using gender-neutral language, and probably also new liturgies for same-sex couples which would “share the same core vows” as liturgies for heterosexual couples.

The commission cautioned that the model the report was proposing was a recommendation only. “This argument is not an attempt to prove something, to prove that this is the way to go forward,” said Jennings. “We are offering a rationale, that is a way of conceiving of it theologically in a way that we’re suggesting might have integrity. But the church will still have to discern whether this is God’s will for the church.”

It is, he added, one of three “logical possibilities” being put forward by the commission, and something of a middle way between the other two. The other two possibilities, according to the report, are, on the one hand, to see same-sex marriages as an “undifferentiated” form of Christian marriage, essentially identical to heterosexual marriages; and, on the other, to see them as “blessed partnerships” rather than covenants before God.

The commission said it arrived at a conclusion that it is “theologically possible to extend the marriage canon to include same-sex couples, without thereby diminishing, damaging, or curtailing the rich theological implications of marriage as traditionally understood.”

But, it hastened to add, “to say that it is theologically possible to make this change is not to say that the change is theologically desirable.” What the commission sought out to do was “to show how it may be done – not why or even whether it should be done,” it said in its report. “These questions require more than theological argumentation: they require an act of corporate discernment.”

The commission was formed by CoGS as a result of Resolution C003, a 2013 decision by General Synod to bring a motion allowing same-sex marriage to its next meeting in 2016. The resolution asked CoGS to craft the motion, which would amend the church’s Canon 21 on marriage “to allow the marriage of same-sex couples in the same way as opposite-sex couples.”

In its report, the commission also concluded that changing the marriage canon to allow for same-sex unions does not directly contravene the Solemn Declaration of 1893, the founding document of the Anglican Church of Canada, which reflects its historic roots in the Church of England and its “theological and doctrinal heritage.”

It noted that when General Synod allowed the remarriage of divorced persons, the ordination of women and the reception of holy communion by children prior to confirmation, they were not deemed to be in contravention of the Solemn Declaration “even though the Church of England had not made those changes at the time they were implemented by the Canadian church.”

Nonetheless, the commission ultimately decided that it was the prerogative of General Synod to determine whether the proposed change to the marriage canon is “in harmony with the Solemn Declaration.”

Among others, General Synod 2016 will “need to discern whether this change is sufficiently rooted in the ‘same Word of God’ and discern its relationship to ‘all things necessary for salvation.’”

It is also up to General Synod to determine whether same-sex marriage “is an area of definition and interpretation of doctrine in which it can make change and, if it, whether it is a change it believes is appropriate.”

The commission’s recommendation of the middle way in understanding same-sex marriage comes nearly at the very end of the report, following about 30 pages of reflection on biblical and theological issues intended to provide the rationale for allowing same-sex marriages. 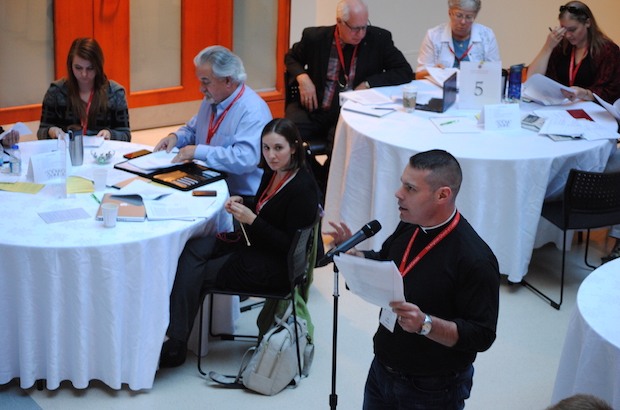 The Rev. Capt. Marc Torchinsky from the Anglican Military Ordinariate of Canada, raises a question after the marriage canon commission presented its report. Photo: André Forget

This reflection is located in what commissioners called two “clusters of meaning” around marriage: on the one hand, creation accounts in the Book of Genesis, which refer to the goodness of the union of male and female, and the creation of new life out of that union, and, on the other, New Testament descriptions of the church – particularly in Ephesians 5 – as the body of Christ. The latter points to the concept of Christian marriage as a way of living out the divine command to love one another, so that the basis of marriage is not procreation and the union of male and female but rather its ability to point to Christ’s relationship to the church as a model of love.

In practical terms, understanding same-sex covenants as “a differentiated form of Christian marriage covenant” is also “compatible with the revision of the canon to include same-sex couples (as called for in the resolution of the General Synod),” said the report. “It would suggest a liturgy that allows for variation in the theological background and symbolism between same-and-opposite-sex marriages, while retaining identical core texts, such as the vows.” The draft resolution drawn up by the committee calls for, among other things, amending the wording of Canon 21 to be gender-neutral, substituting “partners” for “husband and wife,” for example.

Seeing same-sex and heterosexual marriages as essentially the same has a number of advantages, the report states, such as simplicity and formal equality. However, it continues, simplicity may not necessarily be desirable; “with respect to theological understanding richness, complexity, and differentiation are desirable traits.” Also, the report states, “this model would seem to change to some extent the definition of marriage for heterosexual couples” by removing “the rich symbolism of heterosexual love from the definition of marriage, leaving the institution more abstract.”

Jennings also articulated the commission’s view that, “it may be that same-sex relationships have specific gifts to offer the church which would not be celebrated if we tried to fit them into a one-size fits all [category].”

Considering same-sex unions merely as “blessed partnerships” also has some advantages, the report states. For example, it “runs no risk of redefining traditional heterosexual marriage…. No one need fear that marriage has changed.” On the other hand, the report states, “as a blessing without vows, this model does not acknowledge the relationship’s potential to be a place in which the couple exercises their vocation of Christian love by striving to be as Christ to one another in covenanted love.” The question, said the commission, would be whether the church can discern in these partnerships “an instance, of Christ’s love for the church?”

In its report, the commission also drafted a motion that includes a provision allowing dioceses, bishops and congregations to opt-out of performing same-sex marriages. Along with formulating the biblical and theological rationale for allowing same-sex marriages, the commission was charged with developing a “conscience clause,” included in the amendment “so that no member of the clergy, bishop, congregation or diocese should be constrained to participate in or authorize such marriages against the dictates of their conscience.”

Commissioners took turns in introducing various sections of the voluminous report. Bishop Linda Nicholls introduced the report, the Solemn Declaration and the conscience clause; Patricia Bays discussed the background and terms of reference; Jennings explained the Biblical and theological rationale for the proposed change in the marriage canon; Martin tackled the authority of scripture, definition of marriage and the theology of marriage; and Archbishop John Privett presented the report’s conclusion.

The commission’s work included a consultation process, in which it invited opinions on the issue. It received a total of 223 submissions from individuals representing 26 dioceses, two from theological colleges, three from specialists, three from full communion and ecumenical partners, and six from institutions and organizations. Several submitters argued against allowing same-sex marriages, although whether to allow them or not was beyond the commission’s mandate.

The commission has dedicated the report to its chair, Canon (lay) Robert Falby, who died In June. “His unexpected death prior to completion of this report saddened us deeply,” they said. “His knowledge of the church and deep commitment to its life and ministry, born of his many years of dedicated service as a diocesan chancellor, member of General Synod and its prolocutor, were gifts to our work.”

Anglican Journal editor’s note: Portions of this story have been corrected. Some comments were misattributed to Stephen Martin instead of Canon Paul Jennings. Both Martin and Jennings also emphasized that they were not simply presenting their own ideas, but rather of the entire commission. “Our report was very much a collaboration of the entire commission,” said Jennings.