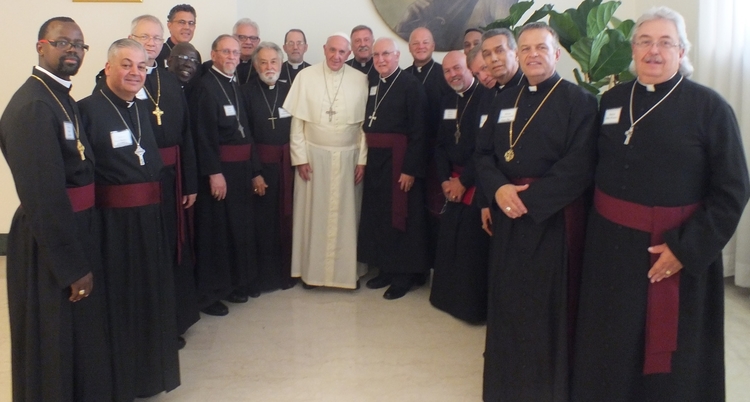 The ‘Miracle of Unity’ Continues After Death of Papal Friend

On Friday October 10th a delegation of Bishops from the Communion of Evangelical Episcopal Churches (CEEC) met for several hours in Rome with Pope Francis. The purpose of the meeting was to continue talks on Christian unity that began almost a year ago between Pope Francis and his long-time friend, CEEC Bishop Tony Palmer. Bishop Palmer, whose iPhone video of Pope Francis pleading for increased unity among Christians went viral after it was presented to a gathering of Protestant Evangelicals, tragically lost his life in a highway crash in the UK earlier this year. In spite of this, Pope Francis wanted the talks to move forward; and he has encouraged Bishop Tony’s wife Emialana and CEEC Ecumenical officer Bishop Robert Wise to continue advancing the dialogue of Christian unity that he and Bishop Palmer had begun.

In his opening remarks, Pope Francis spoke of an “ecumenism of blood” as he told the Bishops that they needed to deal with an issue in the Christian Church. Making reference to his recent trip to Albania, he said  “Today we see how Christians are being persecuted. I was just in Albania. They were not asking them whether they were Catholic or Orthodox. If they were Christian … BANG! They would kill you. Actually, presently in the mid-Orient and Africa and other countries around the world, how many of our Christians are being persecuted and killed? And they don’t ask them if they are Pentecostals, or Orthodox or Catholics. These issues are not being brought up. They are Christians – so they kill them. They kill them because they believe in Jesus Christ. This is the Ecumenism of the Blood.”

Several of the Bishops asked penetrating questions to which Pope Francis answered with clarity and a deep sensitivity. He challenged each of the Bishops to walk out Christian unity in their personal lives as well as in their communities. He encouraged each bishop to find a friend in a different faith community to ‘Walk Together’ with.

The delegation was urged to seek the guidance of the Holy Spirit who will lead each one into relationships that are the foundation for unity. He shared several personal experiences of reaching out to those different than himself and how the Holy Spirit had created strong bonds of lasting friendship and unity.

The CEEC is a communion of Christians from around the world who walk in the convergence of Christianity’s three historical streams: the sacramental, the evangelical and the charismatic.