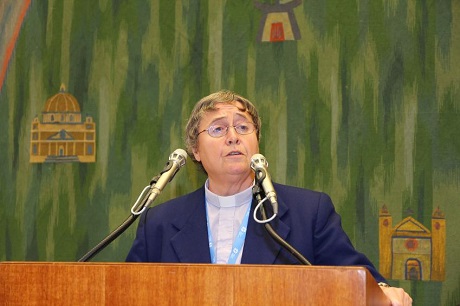 Alyson Barnett-Cowan said she is 'happy to fill in -- to bridge the gap -- while the search process is going on'. Credit: LWF/Maximilian Haas ~ 2014
Archives

Canon Barnett-Cowan, who will retire at the end of January as Director for Unity Faith and Order, has agreed to be a half-time consultant for the position until the position of Secretary General has been filled. She will be based at her home in Canada but will work at the Anglican Communion Office for some days each month.

Canon Kenneth Kearon, the present Secretary General, will leave the post at the end of December as he has been elected Bishop of Limerick and Killaloe in the Church of Ireland. His consecration date is January 24.

Canon Barnett-Cowan said that she has surprised herself by undertaking this task as she was looking forward to her retirement, but that she is happy to fill in to bridge the gap while the search process is going on.

The Standing Committee meets at the end of November to review the job description for the Secretary General of the Anglican Communion and to set the appointment process in motion.