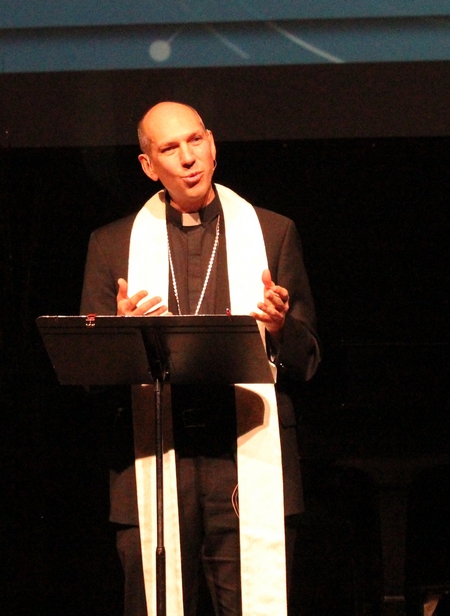 In what might very well be a historic first, on Sunday January 19, Roman Catholic Bishop Donald Bolen was the guest preacher at one of Saskatoon’s flagship Evangelical churches, Circle Drive Alliance Church.

Pastor Eldon Boldt invited Bishop Bolen to preach some months ago and suggested January as a possible time. Boldt has been offering the congregation a series of sermons through January on the theme of Reconciliation so the bishop’s sermon on Christian unity was a natural fit. Nevertheless, the significance of the occasion was not lost on anyone, including the congregation of Holy Family Cathedral to whom Bolen had preached earlier in the morning. Before he left for Circle Drive Church, the Catholic congregation gave Bolen a rousing cheer amid their prayers for Christian unity and thanksgiving for their bishop’s ecumenical passion.

The invitation to Circle Drive Church did not come out of the blue. Pastor Boldt and Bishop Bolen have been friends for a number of years and have happily shared together in prayer and witness. They are both members of a joint consultation committee between the Catholic diocese and the Saskatoon Evangelical Ministers’ Fellowship (SEMF).

The relationship between Boldt and Bolen has developed within the context of a general warming of relations between the Evangelical and Catholic communities. This has been developing for many years. Indeed, Boldt’s uncle Walter Boldt was the pastor of Circle Drive Church from 1960-1989 and had a good friendship with Bishop James Mahoney, bishop from 1967-1995. Catholic ecumenical leaders began to visit SEMF in the early 1990s, and in 1994 SEMF began to send a representative to the local Church Leaders’ meetings. Pioneers of the relationship include Fr. Bernard de Margerie, Eric Stolte, Bill Blackmon, and Pastor Ken Rutherford.

As Boldt reminded his congregation at Circle Drive Church, the Evangelical and Catholic community have now held two joint worship services. In March of 2011 and again in November 2013, the diocese and SEMF invited the Christian community to gather to witness to the unity we already share and to pray for growing fellowship between our churches. Since December 2011 , we have had a local dialogue team that explores issues that have historically divided our churches. Now in its third year, the dialogue is drafting a Common Statement of Faith. It is hoped that this statement will witness to the considerable faith in Jesus Christ shared between our communities.

Previous post: Ancien article : Which global church? The Pentecostal World Fellowship and the WCC
Newer post: Article récent : WPCU day 5: Together… we are called into fellowship