ALIC members during a drafting session of the commission’s final report “To Love and Serve the Lord.” Photo: Neil Vigers

The commission focused on the writing of its final report, “To Love and Serve the Lord,” which looks at the essential connection between koinonia (church unity) and diakonia (church service and witness). Including stories of diakonia from around the world, the report is written with the hope of reaching not only the international church bodies and church leaders but also institutions of theological education and even congregations seeking to deepen their commitment to discipleship.

The commission has been meeting since 2006. It was established by the Anglican Consultative Council and The Lutheran World Federation (LWF) to continue the dialogue between Anglicans and Lutherans on a worldwide level, in progress since 1970. ALIC is co-chaired by Most Rev. Fred Hiltz, Primate of Canada and Bishop Dr Thomas Nyiwe, Evangelical Lutheran Church in Cameroon.

The meeting was hosted by the Anglican Communion with support of the Episcopal Diocese of Jerusalem. Commission members heard of the struggles of Christians in Jerusalem and Palestine, which have compelled many to leave the region. They also heard about the dedication of the local churches to advocate for a just peace among all, to seek good relations among all the faith communities, and to offer higher quality education and health care to the whole society,” an ALIC communiqué states.

Members of the commission visited the Jerusalem Princess Basma Center for Disabled Children and the Augusta Victoria Hospital on the Mount of Olives, as well as the Dar al-Kalima College and the International Center Bethlehem.

LWF President Bishop Dr Munib A. Younan celebrated the final Eucharist for the commission and hosted them for a festive farewell dinner. Bishop Suheil Dawani, head of the Episcopal Diocese of Jerusalem, invited local church leaders for an ecumenical reception, and the commission was addressed by His Beatitude Theophilos III, the Greek Patriarch of Jerusalem. Addressing the commission, both Dawani and Younan expressed hope for closer relations between their two churches.

Dr Kathryn Johnson, Assistant General Secretary for Ecumenical Affairs for the LWF, said this commission had provided an admirable example of how an international commission can speak to the pressing concerns of churches around the world.

The decision of the group to focus on diakonia invites Lutherans and Anglicans everywhere to collaborate more closely in their diaconal work. By stressing the close, reciprocal links of worship and diakonia, the report also underlines the importance of relationships of communion between Anglicans and Lutherans – existing already in a number of regions and now encouraged for other contexts.

The report “To Love and Serve the Lord,” is expected to be finalized by the end of this year. [See LWI news announcement] 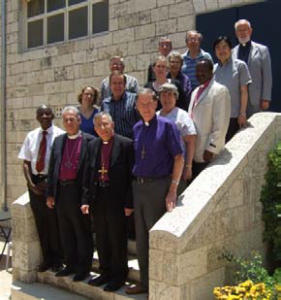 The Anglican–Lutheran International Commission held its sixth and final meeting in Jerusalem from June 18-25, 2011.

The third Anglican–Lutheran International Commission (ALIC) held its sixth and final meeting in the holy city Jerusalem between 18 and 25 June 2011, under the leadership of the Most Reverend Fred Hiltz, Primate of Canada, and of the Reverend Dr Thomas Nyiwé, Bishop of the Evangelical Lutheran Church in Cameroon.

The meeting was hosted by the Anglican Communion with the generous assistance of the Episcopal Diocese of Jerusalem.

Jerusalem was chosen as the venue for this meeting at the Stuttgart Assembly of the Lutheran World Federation (LWF), at which Bishop Dr Munib Younan, Bishop of the Evangelical Lutheran Church in Jordan and the Holy Land, was elected President of the LWF. In his address to that Assembly, the Archbishop of Canterbury had made a plea for greater cooperation between Anglicans and Lutherans in the Middle East, and the Commission met here to learn of the hopes and cares of the two churches in Jerusalem in particular.

Bishop Suheil Dawani, the Anglican bishop, hosted an ecumenical reception for local church leaders, and the Commission was addressed by His Beatitude Theophilos III, the Greek Patriarch of Jerusalem. The Commission spent one of its sessions with Bishop Dawani and Bishop Younan. At both this session and at the reception, members of the Commission heard of the struggles of Christians in Jerusalem and Palestine: of the strain of living a restricted life, of the lack of jobs and opportunities particularly for young people, and of lacking peace with justice for all in society, all of which lead many Christians to leave the holy land and diminish the witness of Christianity in the very places of its birth. At the same time, they heard of the dedication of the local churches to be the hands and feet of Christ: to advocate for a just peace among all, to seek good relations among all the faith communities, and to offer high quality education and health care to the whole society.

Members of the Commission had the opportunity to learn of some of this work firsthand when they visited the Princess Basma Centre and the Augusta Victoria Hospital on the Mount of Olives, and Dar al-Kalima College and the International Center of Bethlehem.

The focus of the work of the Commission at this meeting was the writing of its final report. Entitled ‘To Love and Serve the Lord’, the report focuses on the theme of diakonia: the service and witness of the Church. Many ecumenical agreements have examined koinonia, the unity of the Church; this report looks at the essential connection of koinonia with diakonia. The report is addressed to the two world Communions and their member churches, but it is hoped that much of the material, rooted in Scripture and including stories of diakonia in action from around the world, will be of use to parishes and congregations, and indeed to other ecumenical partners, as they seek to deepen their commitment to discipleship in witness and service.

Present at the meeting were:

The Commission was established by the Anglican Consultative Council and The Lutheran World Federation to continue the dialogue between Anglicans and Lutherans on the worldwide level which has been in progress since 1970. ALIC has built upon the work reflected in The Niagara Report (1987), focusing on the mission of the church and the role of the ordained ministry, The Diaconate as Ecumenical Opportunity (1995), and most recently Growth in Communion (2002), the report of the Anglican–Lutheran International Working Group, which reviewed the extensive regional agreements which have established close relations between Anglican and Lutheran churches in several parts of the world.