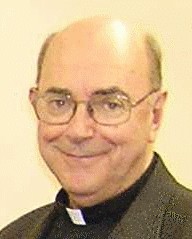 At the end of June this year, Fr. Bernard de Margerie retired from active ministry after over 50 years. During these years he has served in parish ministry across the RC Diocese of Saskatoon, and in a number of specialized ministries. The Prairie Centre for Ecumenism claims Fr. Bernard as our own. He was the founder of the Centre back in 1984, and served as the executive director until 1994. He has continued to have an active role in ecumenism in Saskatoon and across the diocese in more recent years. At retirement, he was pastor of Paroisse Sts-Martyrs-Canadiens in Saskatoon, and ecumenical officer for the diocese.

During the Week of Prayer for Christian Unity in January 2009, Fr. Bernard was “interviewed” by Jan Bigland-Pritchard during the concluding service at McClure United Church. Jan asked him about his life in ecumenism, his recollections about early ecumenical endeavours in Saskatoon, and the founding of the Centre. Here is an audio recording of that interview.

At the Summer Ecumenical Institute in June 2009, Fr. Bernard participated in a panel discussion about the current state of the ecumenical movement. Reflecting on the levels of ecumenical awareness and commitment today, Fr. Bernard suggested that the churches and their leadership need a new conversion to Christian unity. “The journey has become too long, too heavy, and light has dimmed.” As other panellists commented on the apparent “ecumenical winter”, Fr. Bernard reminded us that ecumenical achievements come from the Holy Spirit who moves the hearts of faithful Christians to commitment to the will of Christ for unity. Ecumenical conversion remains an important theme in Fr. Bernard’s ecumenical vision, as it has throughout his ministry. Reports from the Summer Ecumenical Institute appeared in the Prairie Messenger on June 17: