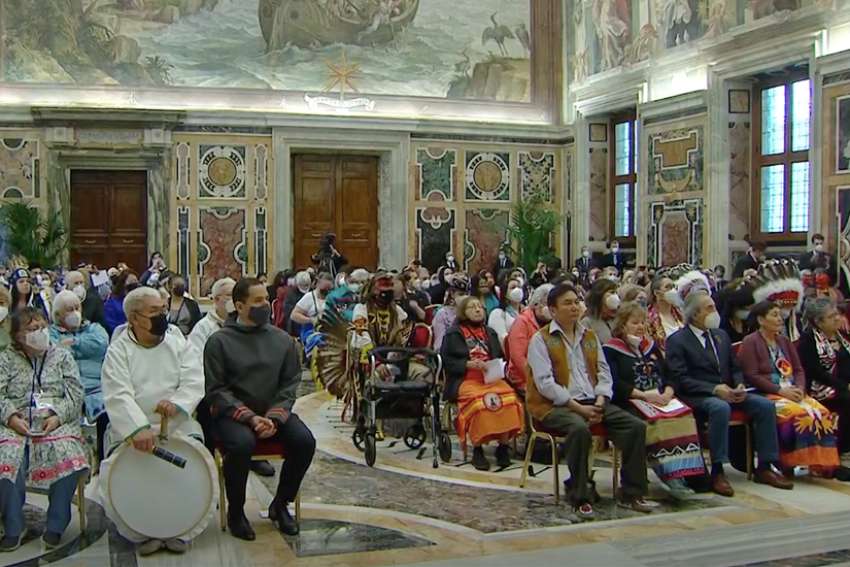 Indigenous delgation at an audience with Pope Francis in Rome from Salt + Light's 'Walking Together' documentary. Credit: CNS/Vatican Media ~ Apr. 1, 2022

Teeing up the historic Papal Visit to Canada from July 24-29, Salt and Light Media Foundation unveiled a 59-minute documentary entitled Walking Together on July 17, chronicling the landmark meetings hosted at the Vatican between Pope Francis and representatives of Canada’s Indigenous Peoples in March and April.

Fr. Alan Fogarty, SJ, CEO and executive producer of Salt + Light Media, said his team’s passion to record this momentous summit kindled instantly after the news came out that ambassadors from the Assembly of First Nations, Métis National Council and Inuit Tapiriit Kanatami would travel to Rome.

“In the initial discussions when the news was coming out, we looked at ourselves and said, ‘where should we be? What should we be doing? What can we document in a way that will be helpful?’ This [documentary] is the best use of our resources as something that will help the Indigenous, the Church, the people of Canada and the Canadian government,” said Fogarty.

The initial Omicron wave of the COVID-19 pandemic derailed the original plan for the emissaries to meet the Pope before Christmas. Pedro Guevara-Mann, who produced, directed and narrated Walking Together, said the additional three months of prep time aided the final quality of the documentary immeasurably.

“We were able to complete way more interviews because of the delay. Going into Rome, we expected we would not have a lot of time to do interviews on the ground,” said Guevara-Mann. “We were able to include Chief [Wilton] Littlechild and Gary Gagnon.”

Read the complete article at The Catholic Register

Littlechild, who attended the residential school system in Alberta for 14 years, is a member of the Ermineskin Cree Nation who served as a commissioner to the Truth and Reconciliation Commission of Canada. Gagnon serves as a vice-president for the Métis Nation of Alberta.

Pre-trip interviews also enabled Guevara-Mann and his fellow documentarians to build solid personal relationships with the delegates they would encounter in Rome. Building this trust led to the representatives feeling comfortable with providing the filmmakers with more time and access than they would if both parties met cold at the Vatican.

Archival images, recorded testimonials, raw footage of each delegation meeting and clips from Pope Francis’ apology on April 1 to Canada’s Indigenous Peoples are some of Walking Together’s visual highlights.

Truly, however, both Fogarty and Guevara-Mann agree that the testimony shared from Indigenous interviewees is the production’s crown jewel.

One of the simple, yet powerful, quotes came from residential school survivor Ted Quewezance. The former chief of the Keeseekoose First Nation said, “Forgiveness is the hardest thing. The hardest. But I’ll tell you, it’s one of the most powerful things an individual could do.”

Cassidy Caron, president of the Métis National Council, is featured sharing her overall takeaway from the Rome visit.

“I wanted him to hear us, and he sure did. And he reflected that back to us, which was incredibly powerful,” says Caron. “You know that he is personally committed to moving forward on these issues. And we don’t know how that’s going to look quite yet, but I know that he heard us.”

One audience segment that Fogarty hopes connects with the audience are Canadian Catholics who have thus far been lukewarm or actively resisted engaging the issue of reconciliation in a thoughtful way.

“There are many people in Canada who are at best indifferent to what is going on with all these issues, and others are kind of negative, fed up and wanting it to go away,” said Fogarty. “Some of those people in Canada may be ignorant to the issues, but we hope it may be educational. And for people who think they know, we hope that the documentary can clear up any misinformation or lack of proper understanding.

“Hopefully this documentary can be the start of their engagement and care for the whole situation.”

A second documentary will feature the sights and sounds of Pope Francis’ visit to Edmonton, Quebec and Iqaluit, which is slated for release sometime before Christmas. Salt +Light Media is planning for a third doc afterwards.

Walking Together is available for free viewing at www.slmedia.org/slplus.