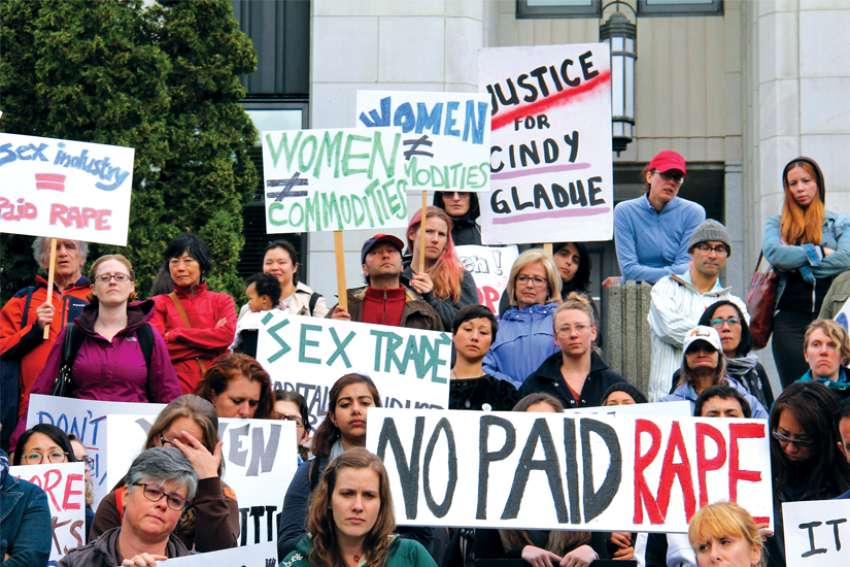 A protest at Vancouver City Hall over the lack of enforcement of prostitution legislation. Credit: BC Catholic ~ 2016

Parliament’s Standing Committee on Justice and Human Rights is being blasted by anti-prostitution groups in Canada after releasing a report that concludes Canada’s current anti-prostitution law does more harm than good.

Although the justice committee report released June 22 stops short of calling for the 2014 law’s immediate repeal, it embraces the “sex-positive” and “harm-reduction” language of sex-industry activists who want to fully decriminalize prostitution. For example, the report describes prostituted persons as “sex workers” and terms prostitution an “industry.”

The committee’s report, titled Preventing Harm in the Canadian Sex Industry: A Review of the Protection of Communities and Exploited Persons Act, capped its statutory review of the current anti-prostitution law enacted under the previous Conservative government.

The law frames prostitution as a form of violence against women and youth and criminalizes both those who purchase commercialized sexual services and those who profit from it. The law gives prostituted persons immunity from prosecution and encourages them to exit prostitution.

In February, the Archdiocese of Vancouver’s Anti-Human Trafficking Committee submitted a brief to the justice committee calling for the law to be maintained “because it targets serious social problems directly or indirectly associated with the prostitution of (mostly) women and youth, while at the same time recognizing and balancing the rights of those who are involved in it as prostituted persons.”

The archdiocesan committee is reviewing the new report, but six feminist anti-prostitution groups, including the Aboriginal Women’s Action Network and the London Abused Women’s Centre, issued a release condemning the report.

“Our experience and the one of thousands and thousands of women here and around the world is that women end up in prostitution by a lack of choice in their lives,” the release said. “Reducing the work of the state to preventing harm in such a narrow and blindfolded manner is dangerous for equality for all women.”

Hilla Kerner of the Vancouver Rape Relief and Women’s Shelter says, “While the report aims to prevent the harm in the Canadian sex industry, it utterly fails to recognize the sex industry as inherently harmful, exploitive and a violent social phenomenon.”

NDP and Conservative members of the justice committee issued separate dissenting reports, with the NDP calling for decriminalization and the Conservatives saying the current law should be maintained and enhanced.

The Conservatives called on the Liberal government to acknowledge that the existing act “is a crucial tool that protects women and girls and criminalizes exploiters and traffickers.”