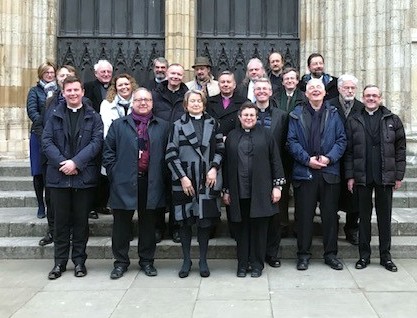 The seventh international meeting of the Malines Conversations Group took place in York, UK, between Sunday 24th March and Thursday 28th March 2019. Under the patronage of The Right Reverend and Right Honourable The Lord Williams of Oystermouth (former Archbishop of Canterbury), this informal group comprises Anglican and Roman Catholic theologians from seven different countries and meets with the blessing and support of the Pontifical Council for the Promotion of Christian Unity and Lambeth Palace. It includes members of both ARCIC and IARCCUM.

The Group was hosted by the Dean and Chapter of York, and welcomed by the Dean, The Right Revd Dr Jonathan Frost. Celebrating the historic relationship between the Archdiocese of Malines and the Diocese of York, Cardinal Josef de Kesel was represented throughout the meeting by the Bishop of Liège, The Right Revd Dr Jean-Pierre Delville, who gave a paper entitled The Eucharist in the context of a divided Church.

The Group visited the Community and College of the Resurrection, Mirfield, for a seminar, and joined with the Community for a celebration of the Eucharist having viewed items belonging to Bishop Walter Frere CR, a participant in the original conversations. On the final evening, the group attended Evening Prayer at the Parish Church of Kirby Underdale, where a window commemorates Cardinal Mercier and Viscount Halifax. The Group joined the Earl and Countess of Halifax for dinner, at which Lord Halifax spoke movingly about his ecumenically-pioneering great-Grandfather.

During seminars and conversations, the Group was once again guided in its thinking about scripture by The Revd Professor Gordon Lathrop, in considering issues around gender by Professor Joseph Selling of KU Leuven, and in exploring canonical questions by The Revd Professor Georges-Henri Ruyssen SJ, of the Pontifical Oriental Institute, Rome. The social entrepreneur and impact consultant Jurgen Mortier also led a working session on organisational strategy. This year’s gathering focussed in particular on issues of gender, orders and Eucharist, responding to the challenge laid down for our churches to find new yet faithful ways of considering old problems in the context of a communion ecclesiology.

The meeting took place within the context of daily prayer in York Minster, and concluded with a celebration of the Eucharist with the Mercier Chalice, in which is set the Episcopal Ring of Cardinal Mercier. In the week after his funeral, the Group prayed in particular for their former patron Cardinal Godfried Danneels who died on 14th March 2019. May the Lord grant him eternal rest.

The Malines Conversation Group is immensely grateful to all its sponsors and supporters, Anglican and Catholic alike. An eighth meeting is planned for next Spring, in Madeira, where Viscount Halifax first met the Abbé Portal. Preparations are also underway for the centenary of the Conversations in December 2021.

The Right Revd David Hamid, Suffragan Bishop of the Church of England Diocese in Europe; Co-chairman of IARCCUM

The Most Revd David Moxon, Former Co-Chairman of ARCIC III and former representative of the Archbishop of Canterbury to the Holy See and director of the Anglican Centre in Rome

The Very Revd Canon David Richardson, former representative of the Archbishop of Canterbury to the Holy See and director of the Anglican Centre in Rome

The Revd Canon Anthony Currer, Secretary to the Anglican and Methodist dialogues at the Pontifical Council for Promoting Christian Unity, Rome

The Revd Cyrille Vael OSB, Monastery of Chevetogne (Belgium); Advisor of NNE (New Narrative for Europe) of the Department for Promotion and Protection of the Regional Cultural Heritage of Europe (European Commission).