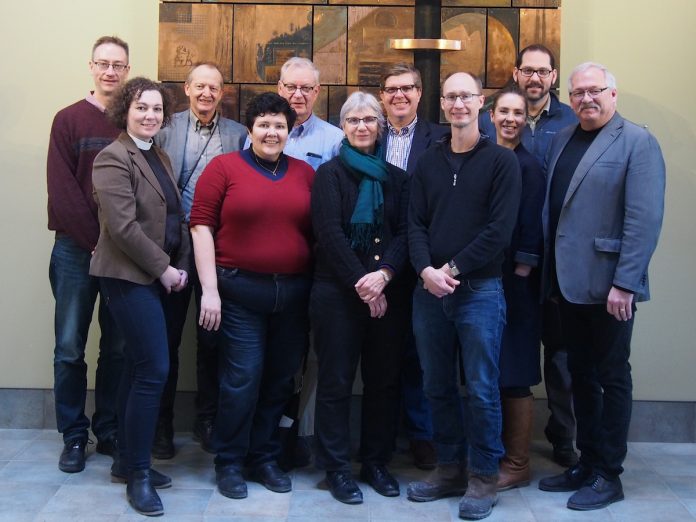 In what’s believed to be the first formal ecumenical meeting between the Anglican Church of Canada and Mennonite Church Canada, members of each church learned what both might be able to share with one another in Waterloo, Ont., February 2-3.

Among other things, Anglican dialogue members expressed a desire to learn from Mennonites “how to be a prophetic voice from a position where you don’t necessarily have influence or power,” says the Rev. Scott Sharman, who participated in the meeting as the Anglican Church of Canada’s animator for ecumenical and interfaith relations.

The goal of the dialogue at this point is primarily for each to learn from and be enriched by the other, says Sharman. “I don’t think that anyone would take anything off the table as possibilities of what it might grow into, but also, at the same time, we’ve not gone into it with a stated goal of working towards establishing a full communion relationship such as we have with the ELCIC [Evangelical Lutheran Church in Canada],” he says. “I think there’s an openness to seeing where the spirit leads and where the conversations take us, but the path hasn’t necessarily been set out in advance.”

The dialogue took place following the approval of a resolution by General Synod in 2016. An “initial and informal” overture for a five-year bilateral dialogue were already “positively received” by Mennonite Church Canada executive director Willard Metzger before the resolution was presented to General Synod, according to background notes included in the resolution.

Stating that the Anglican Church of Canada no longer holds the “privileged” place in Canadian society that it once did, the resolution suggests that through dialogue with the Mennonites, the church might learn “about living faithfully as disciples of Jesus on the margins of society.”

Since their origins, Mennonites have taken a number of “countercultural” stances on various issues —adopting pacifism, for example—and have often formed their own alternative communities, Sharman says. By contrast, he says, the Anglican church has historically aligned itself closer to the state, having served as the “establishment church” in many countries and expecting to have a role in the shaping of policy.

But today, with Canada both more religiously diverse and increasingly “religiously neutral,” he says, Canadian Anglicans are realizing they are “going to need to learn how to continue to be influential…and speak the gospel,” but more as a voice from the sidelines, and “how to form our communities and live out our convictions as distinct communities rather than assuming that the culture is just going to go along with us because we’re the church.”

For their part, Sharman says, Mennonites expressed interest in what they perceived as an Anglican ability to hold together despite differences of opinion.

“They see in Anglicanism…how to be a church that is comfortable with reconciled diversity, that allows for healthy disagreement or good disagreement within a big tent, as something they could learn from,” he says.

There also seems to be some interest among Canadian Mennonites in the liturgical forms of worship that characterize Anglicanism, he says. Mennonite co-chair Melissa Miller, interim pastor at Home Street Mennonite Church in Winnipeg, agrees.

“There are a number of individuals who have grown up in Mennonite churches who find themselves drawn to or leaning into Anglican traditions,” she says. “When I speak with some of those individuals, they speak of the very beautiful liturgy, the frequency of communion, the respect for the Word, for the Bible—those are some of the things that draw them into Anglican worship.

“Our worship, and our worship spaces, are often very simple…there has been a simplicity and a purity of form that can be quite beautiful and satisfying, and it also can leave people hungry for colour or for ritual or for art,” Miller says.

Although Canadian Mennonite organizations were not as involved in the Indian residential school system as the Anglican Church of Canada, there was one residential school operated by a Mennonite-associated mission (one of whose students was Lydia Mamakwa, now bishop of the Indigenous Spiritual Ministry of Mishamikoweesh).

The two churches have already begun to influence one another, Miller says. The current Mennonite hymnal, published in the early 1990s, incorporates elements from other denominations, including Anglicanism, she says. Meanwhile, some Anglican individuals and congregations now use Mennonite Church Canada materials to facilitate discussion between Indigenous and non-Indigenous Canadians on reconciliation.

Both are members of the Canadian Council of Churches, and either they or their affiliated relief and development agencies belong both to ecumenical social justice group KAIROS Canada and the Canadian Foodgrains Bank, a network of Christian organizations for fighting hunger.

The dialogue’s next face-to-face meeting will likely be in early 2019, and dialogue members hope to have a report ready to present to the Anglican Church of Canada’s General Synod when it meets that summer, Sharman says.

Mennonites are Anabaptists, which means they believe in the “believer’s baptism”—that baptism should be practised on those old enough to be able to freely confess their faith in Christ, rather than in infancy.

Formed in 2000 after the merger of three North American Mennonite organizations, Mennonite Church Canada has 225 congregations and 31,000 members, according to its website.

The first Mennonites arrived in Canada in the late 18th century from Pennsylvania.