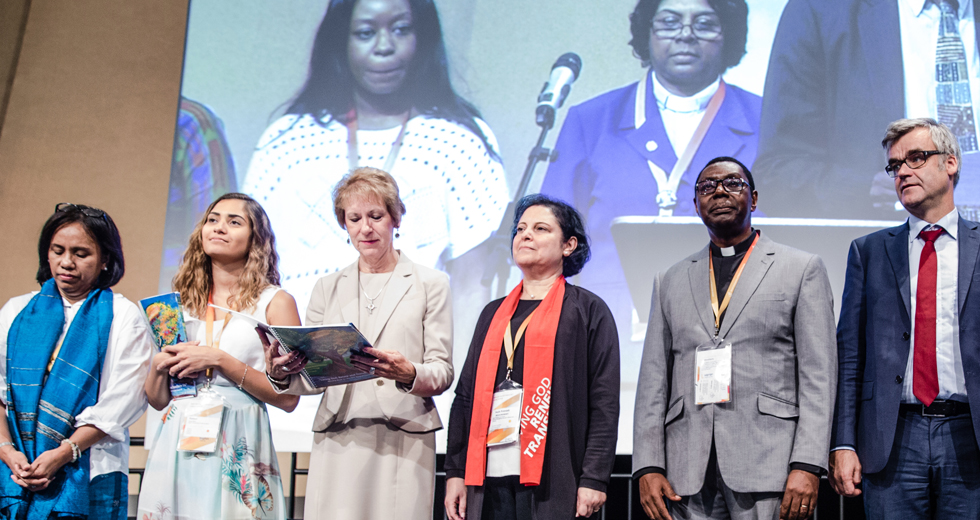 The elections took place on 7 July, the final day of the Council, which has been meeting in the eastern German city of Leipzig since 29 June. Of the 22 members of the new Executive Committee, 10 are men and 12 women; 15 are ordained and 7 are lay people. Five of the members of the Executive Committee are young adults under 30 years of age, including one of the vice-presidents.

Kassab, 52, has been a member of the WCRC executive committee since 2010. The director of the Christian Education Department of NESSL, she was the first woman to receive a preaching licence in her church and, in March 2017, the second woman to be ordained. Kassab has a BA in Christian Education from the Near East School of Theology, and graduated with a Masters of Divinity from Princeton Theological Seminary (USA) in 1990.

“Since 1993 I have been struggling for women to be ordained in the Middle East, and I thank God that just two months ago two women were ordained as pastors in the Middle East,” Kassab told a press conference after her election. “I stand, as I said, for equal rights for women to fully use their talents in the life of the church and for the church to grow through the talents of women.”

Among her priorities are strengthening the regions of the WCRC and supporting young people. “This is a time to listen to them, struggle with them, hear their contribution in the life of the church,” Kassab stated.

She noted that on some issues, WCRC member churches have different views. “The priority is to sit around the table and listen to each other in a spirit of discernment and dialogue guided by the Holy Spirit.”

She underlined the importance of ecumenism in the life of the WCRC. “As Reformed people we cannot survive without ecumenism,” she said. “What happened in Wittenberg is a strong ecumenical statement of the churches.”

Ayete-Nyampong has been clerk of the General Assembly of the Presbyterian Church of Ghana since 2012. He was previously responsible for the church’s international and ecumenical relations and partnerships, as director of Ecumenical and Social Relations.

Vander Wal currently serves in Lisha’s Hill Reformed Church in Colonie, New York. She is a past president of the General Synod of the Reformed Church of America, and moderator of the RCA’s Commission on Christian Unity. She is convener of the Steering Committee of the Caribbean and North America Area Council (CANAAC) and has been a member of the WCRC Executive Committee since 2014.

Apituley, of the Gereja Protestan Indonesia Bagian Barat, is currently senior advisor to the Executive Office of the President of the Republic of Indonesia, having also worked as a special advisor to the Minister of Women Empowerment and Child Protection, and as executive director of the Indonesian Conference on Religion for Peace. She has been a faculty member and lecturer at the Jakarta Theological Seminary since 1997.

Brasil, of the United Presbyterian Church of Brazil, is a lawyer and graduate of the Federal University of Minas Gerais. She is actively involved with the teenagers and young adults of her church at a local and national level. She is currently vice moderator for the youth of her church and was a delegate in 2016 to the General Assembly of the Alliance of Presbyterian and Reformed Churches of Latin America (AIPRAL).

Also elected as members of the Executive Committee are: