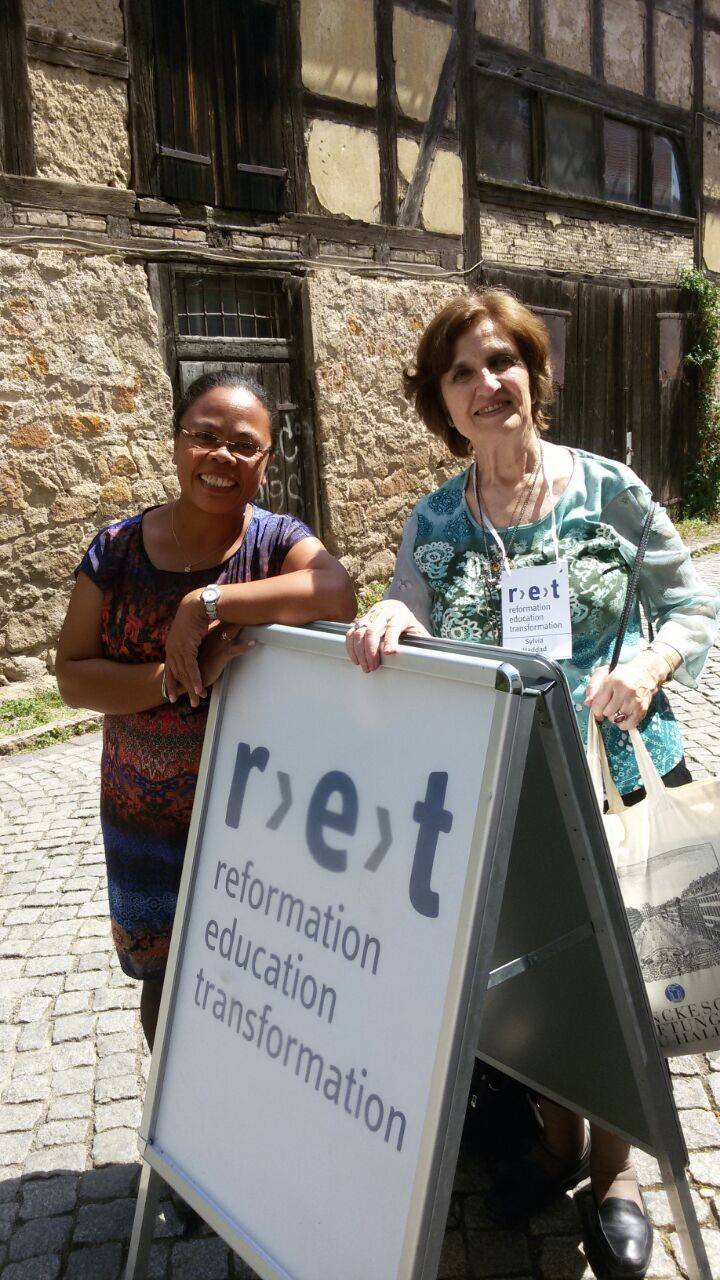 Participants of the Reformation–Education–Transformation consultation in Halle. Credit: Falk Wenzel ~ May 18, 2016

By Stephen Brown, for WCC News

A global gathering in the German city of Halle has called on churches to be inspired by the tradition of the Reformation to become agents of transformation.

“We came from different confessional and denominational traditions and together we sought to discover the transformative power of Reformation today, not as a past event but oriented to the future,” participants said in a statement at the end of the 18-22 May consultation.

Halle, in eastern Germany, lies in the heartland of the 16th-century Reformation of Martin Luther and his followers.

The Halle meeting gathered more than 120 people from 40 countries and was the second stage of a “Twin Consultation” on “Reformation – Education – Transformation” that began with a conference in São Leopoldo in Brazil in November 2015.

“Our world needs transformation,” participants stated. “We live with the realities of fragmentation and conflict that tear our societies apart, including religious fundamentalism and religiously-justified violence.”

They underlined the need to confront negative attitudes in the Reformation tradition towards other religious communities and to encourage a critical understanding of holy texts and religious traditions to overcome religiously-legitimised behaviour promoting violence and division.

The “Twin Consultation” aimed to develop common insights from two contrasting global contexts. Participants said they had been confronted in Brazil with an “abundance of religious expressions of the most diverse kind”. In Halle, however, they met in a region that is now one of the world’s most secularized areas.

“I am more and more convinced that the issue is less about growth or decline of churches in different parts of the world but about how churches, in whatever situation they are, are contributing to promoting transformation and ‘life in fullness’,” said the Rev. Christoph Anders, director of the Association of Protestant Churches and Missions in Germany (EMW), one of the organizers of the consultation process.

The five-day meeting in Halle included keynote addresses, workshops and exposure visits to different projects and situations in the region.

The Rev. Ioan Sauca, associate general secretary of the World Council of Churches (WCC) for education and ecumenical formation, praised the “common and critical reflection” at the meeting about how the principles of the Reformation had renewed the life of churches and transformed societies, and how they can serve today as sources of inspiration.

This had “opened new doors for healing of memories, for mutual understanding and cooperation, and for a common Christian witness and action to our world today”, Sauca said.

Participants said they had been challenged by the early Reformation protest against material greed and corruption to develop alternatives to current economic realities and to promote the Sustainable Development Goals of the United Nations.

“We hope this consultation will contribute to a process towards social and ecological transformation of our societies globally, by adding the necessary aspect of spiritual transformation,” said Thorsten Göbel, head of policy, dialogue and theology at the German Protestant development service Bread for the World. “This is essential for advancing the Sustainable Development Goals and to hold decision-makers accountable for their implementation.”

The Halle conference met at the Francke Foundations in Halle, founded by the theologian August Hermann Francke in 1698 as an educational and social organization for the poor, and at the neighbouring theological faculty of the Martin Luther University of Halle-Wittenberg. A special focus of the meeting was the role of education in transformation and change.

“Learning is a collective process, it is not something that has been completed, but is an on-going process which leads to on-going transformation,” the Rev. Kaisamari Hintikka, assistant general secretary of the Lutheran World Federation, told the meeting. “In order to learn, we need to have places and spaces of meeting, of interaction, of dialogue.”

The “Twin Consultation” is a joint project of Bread for the World, EMW, Faculdades EST São Leopoldo, the Francke Foundations and the Martin Luther University of Halle-Wittenberg in cooperation with the WCC, the Lutheran World Federation, the World Communion of Reformed Churches, the Evangelical Church in Germany, and other partners.