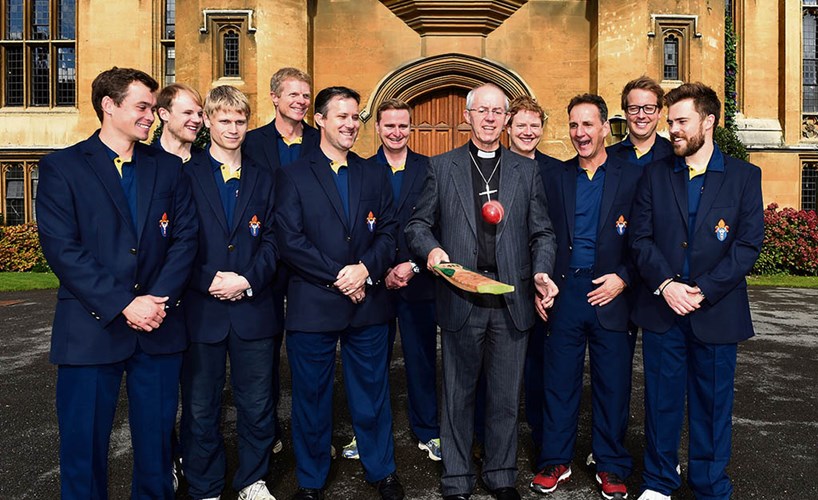 The Archbishop of Canterbury, Justin Welby, and the Archbishop's XI ~ Oct. 2015
By Paul Handley, Church Times

The Archbishop of Canterbury gave his blessing this week to the Archbishop’s XI, an English cricket team who are heading out to Rome this month to compete against a Vatican side.

The trip (21-26 October) follows a visit by the St Peter’s Club — made up of seminarians studying in Rome — to England last autumn. In a memorable meeting in Canterbury, the first-ever match between a Vatican side and an Anglican side ended in a narrow victory for the hosts in the last over (News, 26 September 2014), and raised money for the Global Freedom Network, a joint anti-trafficking initiative (News, 21 March 2014).

Last year’s side has been reformed for the trip to Rome. It is captained again by the Revd Steve Gray, Chaplain at Bradfield College in Berkshire.

The Bishop of Shrewsbury, the Rt Revd Mark Rylands, is accompanying the tour party, which is sponsored by the Ecclesiastical Insurance Group and the Church Times. He said that the fixture would strengthen the bonds of friendship and Christian unity: “Playing together will help make visible our oneness in Christ.”

The match will take place at the Capannelle ground in Rome in the morning of 24 October.