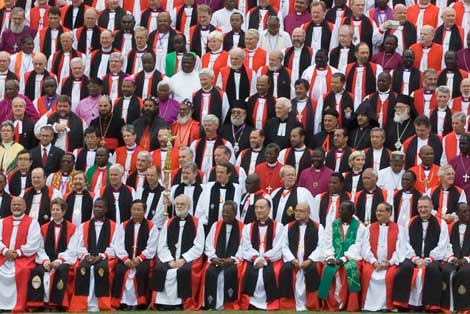 The Lambeth Conference ~ 2008
By George Conger for Anglican Ink

A spokesman for Archbishop Justin Welby told Anglican Ink that as the archbishop had not yet met with each of the primates of the communion, he would not be commenting on the news. Since his installation last year, the Archbishop of Canterbury has travelled extensively and plans on visiting the 37 other provinces of the Anglican Communion within the first 18 months of his term of office.

News of the cancellation was made public by the Presiding Bishop of the Episcopal Church, the Most Rev. Katharine Jefferts Schori on 23 Sept 2014. In response to a question from the Bishop of Rochester, the Rt. Rev. Prince Singh, who asked if money was being set aside to fund the Episcopal Church’s participation in the 2018 meeting, the Presiding Bishop told the Fall Meeting of the House of Bishops gathered in Taipei, Taiwan, that she had been told by Archbishop Welby the meeting had been cancelled.

According to a report of the exchange printed by the Episcopal News Service, the Presiding Bishop said Archbishop Welby had “been very clear that he is not going to call a Lambeth until he is reasonably certain that the vast majority of bishops would attend. It needs to be preceded by a primates meeting at which a vast majority of primates are present.”

She further stated that “as he continues his visits around the communion to those primates it’s unlikely that he will call such a meeting at all until at least a year from now or probably 18 months from now. Therefore I think we are looking at 2019, more likely 2020, before a Lambeth Conference.”

And, if and when it is held, the format of the gathering will likely be different from that of the controversial 2008 gathering. The next Lambeth will “have a rather different format” and the spouses’ conference will be eliminated “simply because of scale issues and regional contextual issues. Bishops’ spouses fill very different roles in different parts of the communion and the feedback from the last one was that it did not serve the spouses particularly well,” the Presiding Bishop said.

First held in 1867 in London at Lambeth Palace, the Lambeth Conferences have gathered the bishops of the Anglican Communion every ten years to discuss the common issues facing the wider church. The conferences have been postponed only twice. The 1918 gathering was postponed to 1920 due to the First World War, and the 1940 conference was postponed to 1948 because of the Second World War.

The decision to postpone the 2018 gathering due to internal dissension is unprecedented. From the first gathering in 1868 which dealt in part with the contentious issue of episcopal autonomy and Biblical interpretation and the heterodox bishop of Natal the Rt. Rev. John W. Colenso (as he was considered by most of his peers) the Lambeth Conferences have consistently discussed controversial issues. Though the resolutions and debates have no juridical value as each province is governed by its own canon law, the pronouncements have always held great moral authority. The 1930 Conference’s endorsement of contraception, for example, provided the foundation for the Episcopal Church to change its formal view of the morality of birth control in 1948. While in 1998 the Conference restated the church’s formal view that homosexual activity was immoral.

In organizing the 2008 Conference, Dr. Rowan Williams – who had endorsed a minority statement on homosexuality at the conference – changed the parameters and purpose of the meeting. A format of indaba, a South African word that the conference organizers interpreted as meaning a form of guided conversation, was adopted. The new format did not permit formal or conclusive statements and was designed to prevent action through what critics saw was conversation without end.

The gathering was also hampered by the largest boycott in the conference’s history. The bishops of the province of York boycotted the 1868 gathering in protest to what they saw as the Archbishop of Canterbury’s presumption at calling a gathering of all the bishops, and J.C. Ryle and a handful of other evangelical bishops boycotted the 1888 gathering out of concerns the conference was institutionalizing what they believed to be an un-biblical prelacy. The question of women bishops attending Lambeth 1998 led a handful of traditionalists to boycott the conference. Two English missionary bishops in Madagascar declined to attend the gathering due to the presence of women bishops,

However the Archbishop of Canterbury’s decision to invite the American, Canadian and Central American bishops who consecrated the Bishop of New Hampshire, the Rt. Rev. V. Gene Robinson to Lambeth led to 206 diocesan and 8 suffragan bishops to reject Archbishop Rowan Williams’ invitation.

In 2008 the Anglican Communion consisted of 729 dioceses, missionary districts, and ecclesial entities divided into 38 provinces and six extra-provincial jurisdictions. Approximately 260 dioceses and jurisdictions within the Communion were not represented by their diocesan bishops at Lambeth. In addition to those boycotting the meeting in protest, the Archbishop of Polynesia, remained at home to lead the coronation services of the King of Tonga, while the Bishop of Salisbury was felled by a stroke. Pending legal proceedings prevented the Bishop of Pennsylvania from attending while bishops from the Andaman and Nicobar Islands of North India have never attended the Lambeth Conference.

Zimbabwe’s uncertain political situation prevented the Bishop of Manicaland from coming while a handful of bishops were also blocked from attending Lambeth due to local circumstances.

Of those identified as absent: 214 bishops from 10 provinces made an affirmative decision not to accept Dr. Williams’ invitation due to reasons of conscience: Australia 7; Southern Cone 1; Episcopal Church 1; Church of England 3; Uganda 30; Nigeria 137; Kenya 25; Rwanda 8; South East Asia 1; and Jerusalem and the Middle East 1. From Africa’s 324 dioceses, 200 diocesan bishops (61 percent) were identified as having refused Dr. Williams’ invitation.

Archbishop Welby’s flying visits across the Communion have sought to ameliorate this situation.