The first meeting of Imam-Priest Exchange for 2014. ‘Together for a New Egypt: the Imam-Priest Exchange,’ is an interfaith initiative which brought together 30 priests (from different denominations) and 30 imams (selected by Al-Azhar) for four weekends in 2013. As a result of these meetings, the participating imams and priests built friendships and engaged together. Photo: Anglican Diocese of Egypt

The Imam-Priest exchange initiative for 2014 opened at Al Azhar al Shereef, at the invitation of the Grand Imam. The 30 imams and 30 priests who participated in the initiative in 2013 shared what they learnt and were presented with certificates. 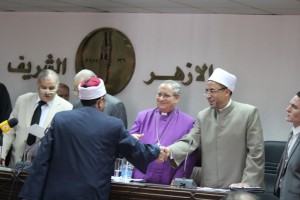 This initiative aims at reducing religious tension through practical dialogue. The need for dialogue has become more critical after the 25 January 2011 Revolution because of the inter-religious strife leading to incidents of tragic sectarian violence. It is clear that religion will play a significant role in shaping Egypt’s future. Muslim Imams and Christian leaders need to address religious harmony and the importance of unity, because it is known how fragile the inter-religious relationships are and the dangerous consequences of the alternative for Egypt’s future.

‘Together for a New Egypt: the Imam-Priest Exchange,’ is an interfaith initiative which brought together 30 priests (from different denominations) and 30 imams (selected by Al-Azhar) for four weekends in 2013. As a result of these meetings, the participating imams and priests built friendships and engaged together. 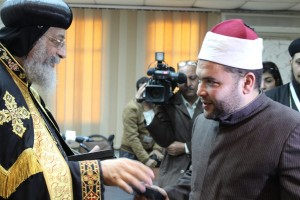 The initiative is sponsored by Bait il-Aila (House of the Family), a group which brings together Christian heads of denominations and Muslims leaders. In the meeting at Al-Azhar, Dr Zakzook, the secretary general of Bait il-Aila, told the participants that they have a hugely significant role and impact on people. As leaders of churches and mosques, they preach to thousands of Egyptians every week and people listen to them. Bishop Mouneer shared that Egypt is passing through a critical situation. He encouraged the leaders that no-one can rescue Egypt except its children, and that as they work at the grass-root level, they have a big influence. 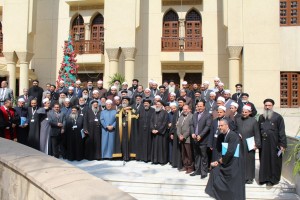 One of the very encouraging results of the initiative was the formation of local initiatives of Bait il Aila in Alexandria and Assiut in Upper Egypt. These sub-groups, formed by participants from this initiative,  seek to address sectarian tension in their local areas. Bishop Armeya, one of the members of Bait il-Aila, shared that these grassroots initiatives are crucial for the success of Bait il-Aila.

A goal of the initiative is that the participants would take practical steps in their own communities. A Presbyterian priest from Imbaba, a poor area of Cairo which has faced sectarian violence previously, met with the imam in the mosque near his church and discussed how to stop the disease of violence. They decided to face the problems directly, and one area they agreed to work together on is addressing the spirit of fanaticism in schools. They did not want to leave religious teaching to the teachers, and started visiting schools together to talk about religious unity.

For more information, download the 2013 report on this initiative