Members of the International Commission for Anglican-Orthodox Theological Dialogue gather in the Diocese of St Asaph in the Church of Wales. Photo: Phil Topham

In the name of the Triune God, and with the blessing and guidance of our Churches, the International Commission for Anglican-Orthodox Theological Dialogue (ICAOTD) met at the University of Chester, United Kingdom during 3-10 September 2012. The Commission is grateful for the hospitality extended by the Anglican Communion.

The ICAOTD is continuing in its in-depth study of Christian anthropology, particularly in regard to what it means to be a human person created in the image and likeness of God. The Commission discussed the draft of its joint theological work on this subject, developed through the collaborative studies of previous meetings and enriched by presentations at this meeting on nature and grace, marriage, celibacy and friendship, and creation. Recognizing the need for our churches to address the urgent issues of contemporary humanity, the Commission explored the application of its study, particularly in the area of ecology.

The members of the Commission were warmly welcomed to the diocese of St Asaph in the Church in Wales by Bishop Gregory Cameron and by clergy and faithful of the churches of the diocese. Members of the Commission visited the churches of St Giles, Wrexham and All Saints, Gresford. Accompanied by the Roman Catholic bishop of Wrexham, they prayed at St Winefride’s well, a site of holy pilgrimage for many centuries, and enjoyed fellowship with parishioners, local civic dignitaries and other ecumenical guests at St Peter’s Church, Holywell. Members took part in Choral Evensong at St Asaph’s Cathedral and, following the service, were graciously hosted by the bishop in his home. The Commission members appreciated the opportunity to learn about the long and rich history of Christianity in Wales, and to be so thoughtfully received by Bishop Gregory, himself a former co-secretary of the dialogue.

Daily prayer strengthened the work of the Commission. Members also attended the Divine Liturgy at St Barbara’s Orthodox Church in Chester and the Eucharist at Chester Cathedral, where they were warmly welcomed by the Dean and Chapter. 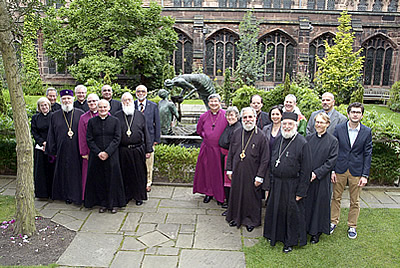 The Commission members were mindful that they were meeting in the last months of the ministry of His Grace the Archbishop of Canterbury, Dr Rowan Williams. The Commission is deeply grateful for his ongoing support and his contributions to their work.

The work of the Commission will continue at its next meeting in Novi Sad, Serbia in September 2013 at the invitation of His Holiness Irinej, Patriarch of the Serbian Orthodox Church.

Representatives of the Orthodox Church

Representatives of the Anglican Communion

Papers submitted to the meeting:

The Revd Dr Duncan Reid, A reading of Westcott’s Gospel of Creation: an early venture into ecological theology?

Metropolitan Seraphim of Zimbabwe, The terms ‘Nature’, ‘Grace’, ‘Freedom’ from the Orthodox point of view