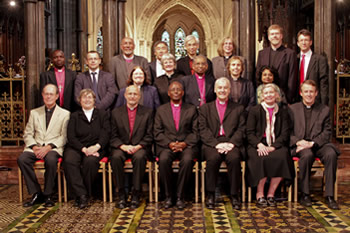 All this is from God, who reconciled us to himself through Christ, and has given us the ministry of reconciliation. (2 Cor 5.18)

Gathered in the name of the Triune God, the Inter-Anglican Standing Commission on Unity, Faith and Order (IASCUFO), under the chairmanship of the Most Revd Bernard Ntahoturi, Archbishop of Burundi, met for daily prayer, Bible Study of 2 Corinthians and celebration of the Eucharist, and to prepare their report for the meeting of the Anglican Consultative Council to be held in Auckland, New Zealand, 26 October-8 November 2012 (ACC-15). Members reflected on the Christian calling to work for the visible unity of God’s Church as ambassadors for Christ in the ministry of reconciliation. The Commission received updates from ecumenical dialogues with Lutherans, Methodists, the Orthodox, Reformed, and Roman Catholics. Work relating to the Anglican Communion Covenant, Instruments of Communion, theological anthropology, and reception continued.

The Commission expressed its enormous appreciation for the ministry of the Archbishop of Canterbury, Dr Rowan Williams, as he prepares to step down and take up his new responsibilities as Master of Magdalene College, Cambridge.

This, the fourth meeting of IASCUFO was held at the Emmaus Centre, Dublin. Members joined in the celebration of the Sunday Eucharist at Christchurch Cathedral, Dublin, attended evensong at St Patrick’s Cathedral and were hosted at a dinner at the Church of Ireland Theological Institute by the Church of Ireland’s Commission for Christian Unity and Dialogue. The Commission also met with the Most Revd Dr Michael Jackson, Archbishop of Dublin and Chair of the Management Group of the Anglican Communion’s Network for Inter Faith Concerns (NIFCON). Opportunities to see the early papyrus fragments of the Gospels and the letters of St Paul at the Chester Beatty Museum and the ninth-century Book of Kells at the Trinity College Library were deeply appreciated, as was a visit to the ancient monastic city of Glendalough.

The Commission commends for study the work of the Anglican-Old Catholic International Co-ordinating Council (AOCICC), Belonging Together in Europe: a joint statement on ecclesiology and mission, and hopes that ACC-15 will support the renewal of AOCICC’s mandate. IASCUFO also commends the Jerusalem Report of the Anglican-Lutheran International Commission, To Love and Serve the Lord: Diakonia in the Life of the Church, and supports proposals for developing that work. Following exploratory talks in 2011 between the Anglican Communion and the World Communion of Reformed Churches, IASCUFO also hopes that ACC-15 will support the re-establishment of a formal dialogue with the Reformed Churches. IASCUFO commends the text of the WCC Faith and Order Commission, The Church: Towards a Common Vision, to ACC-15 for referral to the churches of the Anglican Communion, and itself intends to undertake further study of this text. Transitivity (the question of the relationship of different ecumenical agreements to one another) is the subject of a further report by IASCUFO to ACC-15.