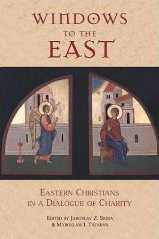 Illustrated with icons by Marianna Savaryn

Published with the Prairie Centre for the Study of Ukrainian Heritage.

In twelve beautifully crafted essays, this book opens a window to the intriguing world of Eastern Orthodoxy. Readers will encounter the complex patterns that underlie Orthodox Christian spirituality. They will read about Eastern Christian history and about the Orthodox understanding of Communion, the nature of prayer, and of Mary the Mother of God.

This volume is the result of a "dialogue in charity" between participants of several churches, including Ukrainian Catholic, Greek Orthodox and Roman Catholic. Each of the twelve learned but accessibly-written essays presents both sides of the east-west dialogue between Christianity's two streams. Ecumenical and mutually tolerant, these various perspectives are in agreement that "the Christian faith is fundamentally a religion of giftedness."

Fr. Myroslaw Tataryn teaches religious studies at St. Thomas More College in Saskatoon. He is the author of How to Pray With Icons, also published by Novalis.

Jaroslav Skira teaches Historical Theology and Eastern Christian Studies at Regis College, in Toronto. A married Ukrainian Greco-Catholic layperson and father, Skira is also a member of the Archdiocese of Toronto's Ecumenical and Inter-Faith Commission.