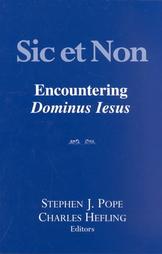 In Sic et Non, Stephen J. Pope and Charles Hefling bring together twelve penetrating analyses of Dominus Iesus, the "Declartion on the Unicity and Salvific Universality of Jesus Christ and the Church," issued on September 5th 2000 by the Congregation for the Doctrine of the Faith. Scholars of such note as ecclesiologist Francis A. Sullivan, theologian Robert Imbelli, biblical scholar Pheme Perkins, and comparative interreligious theologian Francis X. Clooney dare both to agree with the Congregation, where it points out core elements of Christian tradition and to point out what they see as elements that appear to have been composed in haste and without reference to agreements reached in dialogue with other Christian churches and other religious traditions, especially Judaism and Islam. In addition to authors mentioned above, there are chapters by Harvey D. Egan, S. Mark Heim, Frederick Lawrence, Ruth Langer, Philip A. Cunningham, and Qamar-ul Huda.