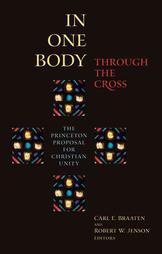 This slim book could have substantial positive impact to the extent that Christian churches are open to "conversion", denominational conversion. The main conviction of the Princeton Proposal is this: "We agree, (however,) that the unity we seek must be unambiguously visible, "so that the world may believe" (John 17:21). Unity must be recognizable as unity without an extensive theological gloss. One must be able to see that the church, in its ordinary life and practice, is one community reconciled in Christ." (n. 45)

The authors are sixteen theologians and ecumenists from diverse church backgrounds. The Princeton Proposal is not an official document of a church or group of churches, but rather a set of substantial convictions coupled with an urgent plea to the churches. Here is a glimpse at two convictions of the Princeton Proposal --among several--, which I find quite striking and helpful.

First, the present ecumenical movement must return to the goal of the visible unity of Christ's church --as articulated carefully by the World Council of Churches, New Delhi, 1961. The Princeton Proposal authors propose "that the unity which God promises and to which he calls his church is a unity of Christians --and here the Princeton Proposal quotes from the New Delhi declaration-- made visible as all in each place baptized into Jesus Christ... are brought by the Holy Spirit into one fully committed fellowship, holding the one apostolic faith, preaching the one Gospel, breaking the one bread..." The Princeton Proposal authors then submit "that the churches' retreat from this vision is sin, which is visited upon the churches in their weakness and unfaithfulness." (n. 1)

Second, the document proposes a demanding (re-)assessment of what the churches by and large presently consider and cherish as "diversity". "The apostolic message does not affirm diversity for its own sake. The life of the church thus calls for continuous critical sifting and reconstruction of human identity. Elements that constitute our differences must be questioned, judged, reconciled and reconfigured within the unity of the body of Christ..." (n. 23)

The Princeton Proposal also outlines concrete suggestions for discernment and action now on behalf of visible unity. The document is not perfect nor complete. It is indeed worthy of personal and group study and discussion, in view of wise and courageous discernment and ecclesial action.