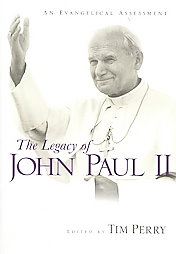 Running parallel with this pope's ministry was an unprecedented level of conversation between Protestant evangelicals and Roman Catholics. In the West, at least, there was a growing sense that in a post-Christian society it was time for Christians of orthodox faith to explore their common commitments and to make common cause in the great moral and social issues of the day. Tim Perry calls on some of the best evangelical minds to offer their assessments of the thought of John Paul II as expressed in his major encyclicals.